Norwich slip closer to relegation with home defeat to Southampton 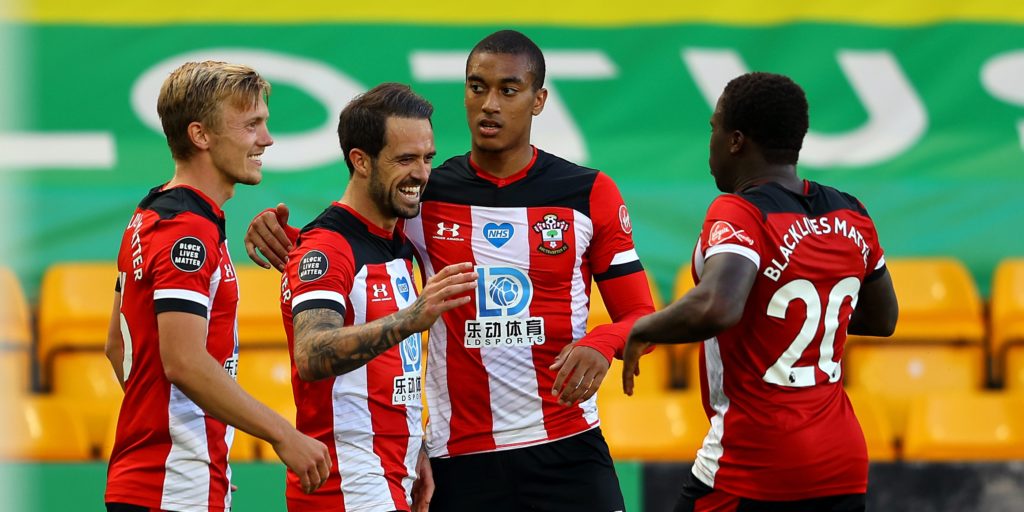 Ings. Armstrong and former Norwich player Redmond on target in convincing away win at Carrow Road,

With Daniel Farke’s six points adrift and fast running out of time, the rock-bottom Canaries desperately needed to make a winning return to Premier League action after a 104-day break due to the coronavirus pandemic.

But a fine Norwich start quickly petered out as Southampton moved 10 points clear of the drop zone, with second-half goals from Ings, Armstrong and Redmond sealing a 3-0 win at an empty Carrow Road.

Saints waltzed to victory in East Anglia but things could have been so different had Ings not been alert in his own box during the opening minutes to close down Tom Trybull.

Ralph Hasenhuttl, who signed a new deal until 2024 earlier in the month, would see his side dominate the match after a shaky start, with Ings hitting the crossbar in the first half.

Saints turned their dominance into goals shortly after half-time, with the England hopeful scoring a fine curling effort before setting up Armstrong to bury a low shot past Tim Krul.

Redmond added a third against former club Norwich, whose uphill battle to avoid an immediate return to the Championship now has an even steeper incline.

As at Wednesday’s Premier League matches, both sides took a knee as part of the Black Lives Matter movement after observing a minute’s silence for those impacted by Covid-19.

Norwich flew out of the blocks when play got under way and penned the visitors in their own half, with Ings producing a fine recovery challenge to thwart Trybull from a free-kick just two minutes in.

Saints looked set to be caught cold but just about held out as Kenny McLean rifled a low shot just wide before Josip Drmic was closed out.

But Norwich’s breathless start wore off as the visitors took control, with Armstrong going close from a corner taken by newly-appointed club captain James Ward-Prowse.

Saints were pressing relentlessly and Jack Stephens impressively swept up, before bursting forward from the halfway line and playing wide for Ings to hit a first-time strike that hit the woodwork.

Hasenhuttl’s men were unable to find a first-half breakthrough but required just four minutes of the second period to pull ahead.

Norwich failed to deal with a throw-in on the left and Armstrong prodded into Ings, who curled a lovely shot from just inside the box past Krul into the top right-hand corner.

The roles reversed in the 54th minute as Saints extended their advantage.

Ings played the ball to Armstrong and the Scotland international showed good control and a cool head before firing a low shot past Krul from the edge of the box.

It was a gut punch that left Norwich reeling, with Jan Bednarek twice blocking Teemu Pukki before substitute Mario Vrancic saw a goal ruled out for offside.

A great goalline clearance by Max Aarons prevented Ward-Prowse getting in on the act, with Krul tipping an Armstrong shot wide as Saints looked for a third goal.

It arrived in the 79th minute. Michael Obafemi cut the ball across to former Norwich forward Redmond, who all too easily took the ball past Ben Godfrey and fired a low shot past Krul.

Nathan Tella came on for his debut as the clock wound down on a perfect restart for Saints. As for Norwich, Farke has plenty of work to do.