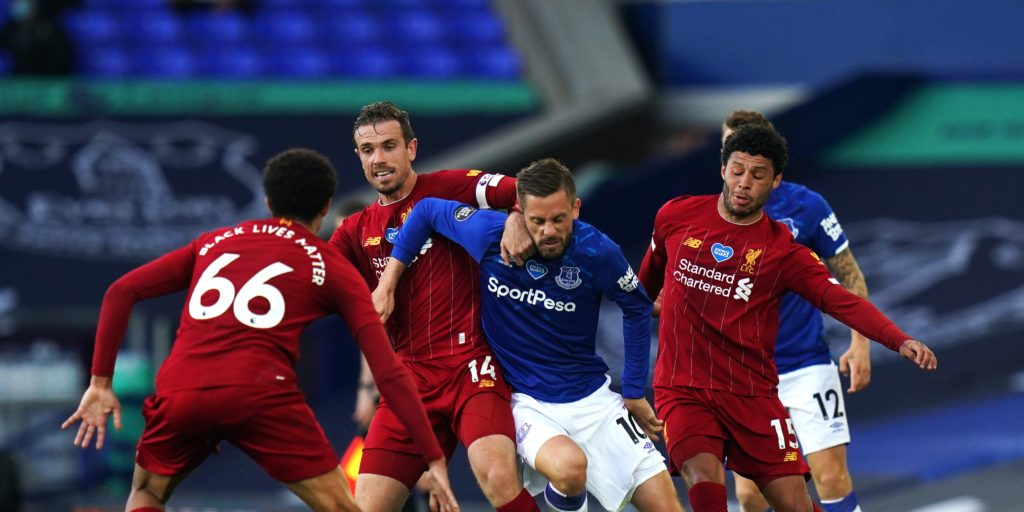 Liverpool were held to a goalless draw by Everton.

The resumption of the Premier League continued this weekend and here the PA News Agency picks out five talking points.

The title may be all but in the bag but Everton managed to frustrate champions-elect Liverpool in a goalless derby at Goodison Park. Liverpool were not quite in the groove so it remains to be seen when, rather than if, the title is won. Manchester City’s result against Burnley on Monday night will give us a clearer picture. If City drop points Liverpool could clinch it at Anfield against Palace on Wednesday night. If not, it’s the small matter of City v Liverpool a week on Thursday.

Those Arsenal fans who thought all their problems would disappear when they finally got rid of Arsene Wenger must now be pining for those heady days of fourth-placed finishes and stubborn philosophies. Unai Emery has been and gone and now Mikel Arteta is struggling to get the Gunners firing. It is back-back-defeats since the restart after Neal Maupay’s last-gasp winner for Brighton.

Pog days are not over

Paul Pogba reminded us all that he still plays for Manchester United when he made his first appearance since Boxing Day. Not only that, he was really rather good in a 27-minute cameo during which he won the penalty which secured a 1-1 draw against Tottenham and his former United boss Jose Mourinho. Pogba continues to divide opinion, and it could be another false dawn, but clearly the talent is still there.

Tight at the bottom

The relegation field is narrowing following big wins for Newcastle and Southampton which should keep them out of harm’s way. Of those still in trouble Brighton did themselves a power of good by beating Arsenal and Watford nicked a point off Leicester. The big losers were West Ham, Aston Villa and Bournemouth, who are level on 27 points with the Hammers just staying afloat above the drop zone.

Just when we thought 2020 could not get any weirder, Joelinton scored a goal. Yes it was a tap-in. Yes it was the third goal in a 3-0 win against 10 men. But to Newcastle’s misfiring Brazilian striker it meant the world. Not for the first time Joelinton had missed a simple chance earlier on, but he recovered to grab only his second goal in 30 Premier League appearances, 301 days after his first, as the Magpies made short work of Sheffield United.