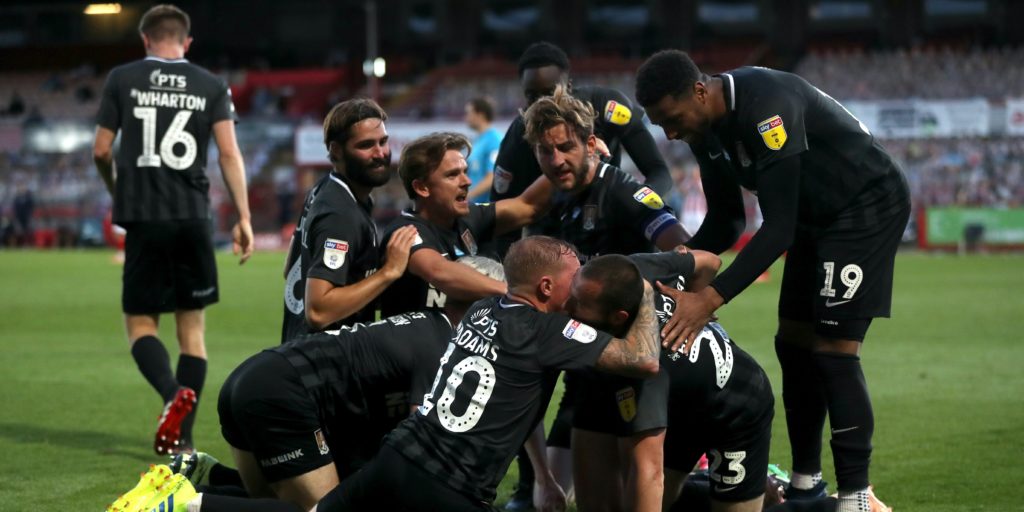 Callum Morton hit a brace and Vadaine Oliver was also on target.

Northampton overcame a two-goal first-leg deficit to claim their place in the League Two play-off final following a 3-0 win at Cheltenham.

Goals from Vadaine Oliver and Callum Morton hauled them level on aggregate at 2-2 before Morton, on loan from West Brom, bagged the winner 13 minutes from time.

The visitors looked the livelier throughout and threatened as early as the fourth minute when Nicky Adams’ cross from the left found Morton but his header lacked the pace to trouble Robins goalkeeper Owen Evans.

An early corner and a couple of long throws from skipper Charlie Goode put the home defence under further pressure before the Cobblers made their early pressure count with their ninth-minute opener.

Adams again provided the cross, this time from the right, and Oliver rose on the edge of the six-yard box to guide his header past the Cheltenham keeper and into the bottom right-hand corner.

There was almost a second a minute later when Morton created space for the shot but skied his effort over the bar.

The visitors were almost caught out on the half-hour when a long clearance from Evans picked out Ryan Broom, who in turn played in Alfie May but the striker was offside.

Jonte Smith put an effort a yard wide of the Cheltenham target as the hosts looked to level on the night and they were awarded their first corner eight minutes before the break only for Jake Doyle-Hayes’ kick to be headed clear.

Both sides went close late in the half, Oliver climbing high to head a delightful Goode cross over the target for the Cobblers while at the other end, May had an effort blocked by the hard-working Northampton skipper.

Cheltenham boss Michael Duff sent on striker Reuben Reid at the start of the second half in place of Smith and the home side had an early effort when Doyle-Hayes put in a low shot.

But this was to be a false dawn for the Robins. Moments later Oliver stung the palms of Evans before Adams put an effort inches wide with the Cheltenham keeper beaten.

The equaliser came after 57 minutes when Goode got his head on an Adams corner and Ben Tozer’s attempted headed clearance for the hosts rebounded off Morton into the net.

Another corner soon after saw Scott Wharton head over as the visitors looked to wrap things up but it was a mistake that gifted them their winner with 14 minutes remaining.

A mix-up between keeper Evans and defender Will Boyle allowed the ball to run for Michael Harriman. His shot hit the foot of the post but Morton followed up for his second of the game.

The young striker almost wrapped up his hat-trick when, with seven minutes remaining, he broke upfield only for Evans to keep out his final shot.

Cheltenham pushed for an equaliser in the seven added minutes at the end but the visitors held on for the win.