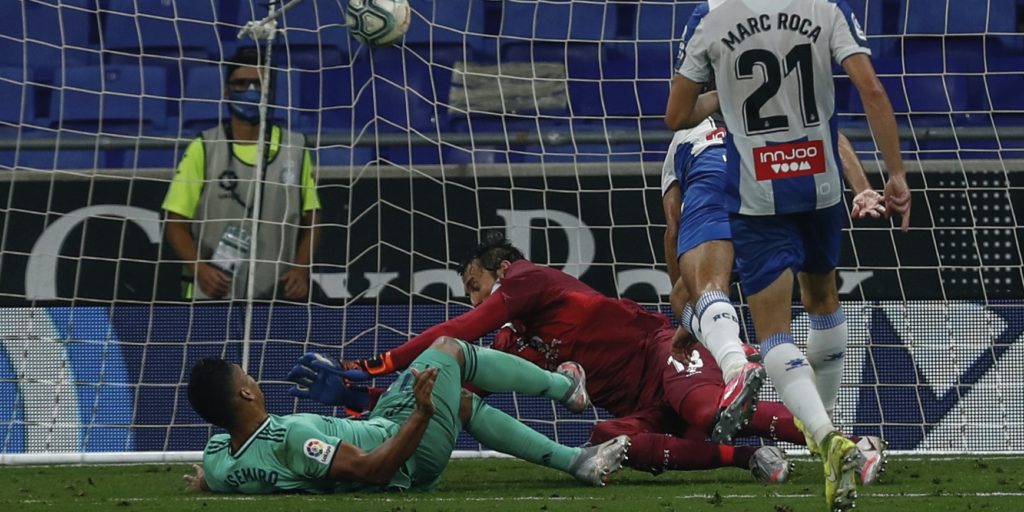 In Italy, two late goals for Inter Milan keep them within reach of a top two spot.

Casemiro scored the only goal as Real Madrid moved two points clear at the top of LaLiga with a 1-0 win at Espanyol.

Real leapfrogged Barcelona back to the summit with eight games remaining but were made to fight after Karim Benzema’s outrageous back heel had set up Casemiro’s decisive strike on the stroke of half-time.

Espanyol created a string of chances to make it an anxious night for Zinedine Zidane’s side, who were also wasteful in front of goal.

Levante bounced back to winning ways with a comfortable 4-2 home win against mid-table rivals Real Betis.

First-half goals from Paco Alcacer and Gerard Moreno earned Villarreal a 2-0 home win against Valencia and kept them in the hunt for Champions League qualification.

Eibar gave their survival hopes another shot in the arm as they won 2-1 at Granada.

In Serie A, Inter Milan scored two late goals to win 2-1 at Parma and keep pace with top two Juventus and Lazio in third place.

Inter, trailing to Gervinho’s first-half effort, had substitute goalkeeper Tommaso Berni sent off without making it on to the pitch following a touchline incident.

But Antoni Conte’s side hit back through Stefan de Vrij (84) and Alessandro Bastoni (87) to clinch three vital points, while Parma’s Juraj Kucka was shown a straight red card for his reaction off-the-ball following Inter’s equaliser.

Atalanta remain on course for a top-four finish after notching their sixth straight league win, 3-2 at Udinese.

Luis Muriel struck twice for Atalanta with long-range efforts after Duvan Zapata had given them an early lead and Kevin Lasagne’s brace for Udinese was not enough.

AC Milan kept alive their hopes of a top-six finish with two late goals in a 2-0 victory over fifth-placed Roma.

Ante Rebic broke the deadlock in the second half and Hakan Calhanoglu converted a late penalty after Roma defender Chris Smalling’s foul on Theo Hernandez.

Napoli made it five games unbeaten in Serie A to stay sixth after a 3-1 home win against bottom club Spal.

Jose Callejon and Amin Younes were on target for Napoli after Spal’s Andrea Petagna had cancelled out Dries Mertens early opener.

Brazilian defender Rogerio struck a stoppage-time equaliser for Sassuolo in a 3-3 home draw with Hellas Verona and Sampdoria remain in a relegation dogfight after slipping to a third straight defeat, 2-1 at home to Bologna.

In Germany, Stuttgart bounced back to the Bundesliga at the first attempt as they secured the runners-up spot as expected in the second tier, despite a 3-1 home defeat to Darmstadt. Stuttgart finished three points clear of third-placed FC Heidenheim, who lost to 3-0 to champions Arminia Bielefeld but had no realistic chance of catching Stuttgart due to goal difference.

Stuttgart’s former Germany international Mario Gomez, 34, scored his side’s goal and later confirmed it was likely to be his final match before he retires as a player.

Hamburg missed out on the play-offs and must spend a third season in Bundesliga 2 after they crashed to a 5-1 home defeat to Sandhausen in their final match.

Hamburg needed to better the result of Heidenheim, who now go into a play-off again the Bundesliga’s third-last placed team, Werder Bremen, for next season’s final top-tier berth.

On the last day of the Bundesliga on Saturday, Bayern Munich were crowned champions again, a 4-0 win at Wolfsburg leaving them 13 points clear of Borussia Dortmund.