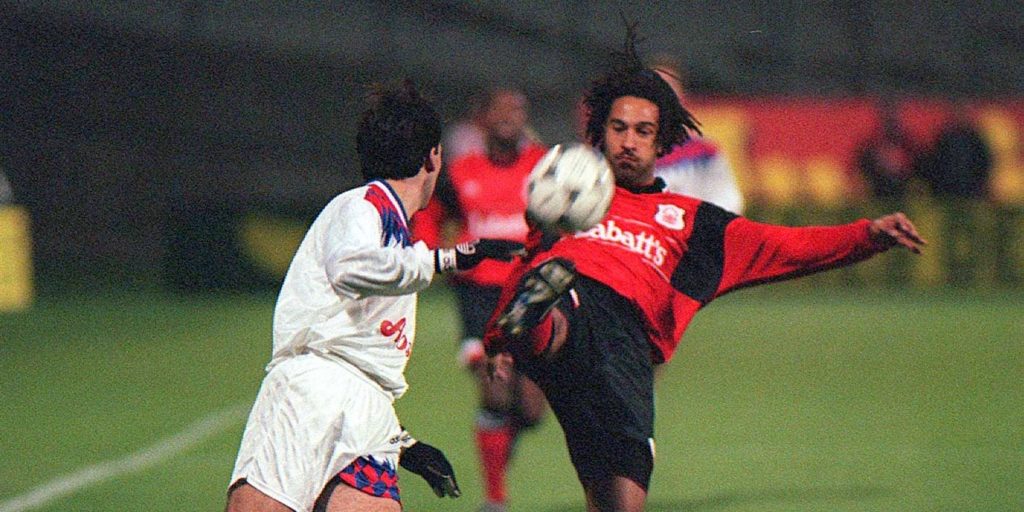 The former Nottingham Forest forward was the regular butt of jokes on the 1990s comedy programme.

Jason Lee says he has never received a direct apology from David Baddiel and Frank Skinner over the series of sketches in which they mocked his hairstyle and playing ability.

The former Nottingham Forest forward was regularly the butt of jokes on the Fantasy Football League programme in the 1990s.

Baddiel has issued a number of apologies on social media and did so most recently in a Daily Telegraph article earlier this year for blacking up and wearing a pineapple on his head, saying it was “part of a very bad racist tradition”.

Lee now works as an equalities executive with the Professional Footballers’ Association, which has worked with research firm Run Repeat on data which shows “evident bias” in how some football commentators describe darker-skinned players.

Lee says that can have a negative impact on how those players are perceived, and likened it to his own experience as a result of the 1990s comedy programme.

He told the PA news agency: “Baddiel & Skinner, did they realise the impact of what they were saying, how it affected so many people?

“Especially a hairstyle, you’re talking about ethnicity, a lot of black people would wear dreadlocks and feel deeply offended by someone who’s getting mocked for a similar hairstyle. The implications were far wider, and it wouldn’t happen today.

“You see (Wilfried) Zaha playing today, and others with similar hairstyles, it couldn’t happen today, and blackface as well, you wouldn’t be able to blackface now, that’s crazy.”

Lee says as far as he is aware Baddiel and Skinner have never tried to contact him to apologise.

“Luke Chadwick was going through a similar thing (where he was being mocked for his appearance on the panel show ‘They Think It’s All Over’) and he got an apology from Nick Hancock, I never received an apology from Baddiel and Skinner,” Lee said.

“To be on TV and saying it, you can get away with it, the fact that they might never meet you.

“When the show was going out I was invited on and I declined because I was 23 years of age. As far as I was concerned I had better things to do. I’m not going to laugh with you, laughing at me when I’m trying to take myself seriously and build a career.”

Asked if it was now too late for an apology or whether he would still welcome one, he added: “It’s never too late. I think that would be good for maybe my children to hear that, and it would show them that in today’s day and age people maybe are more remorseful, and people are having to look at how they act.

“That is what this study is about, it’s why we’re talking about it at the moment. Go back five years, 10 years, we wouldn’t have had this conversation – (then it would have been a case of) what have they got to apologise for? But it’s a good thing, we’re all here to learn.”