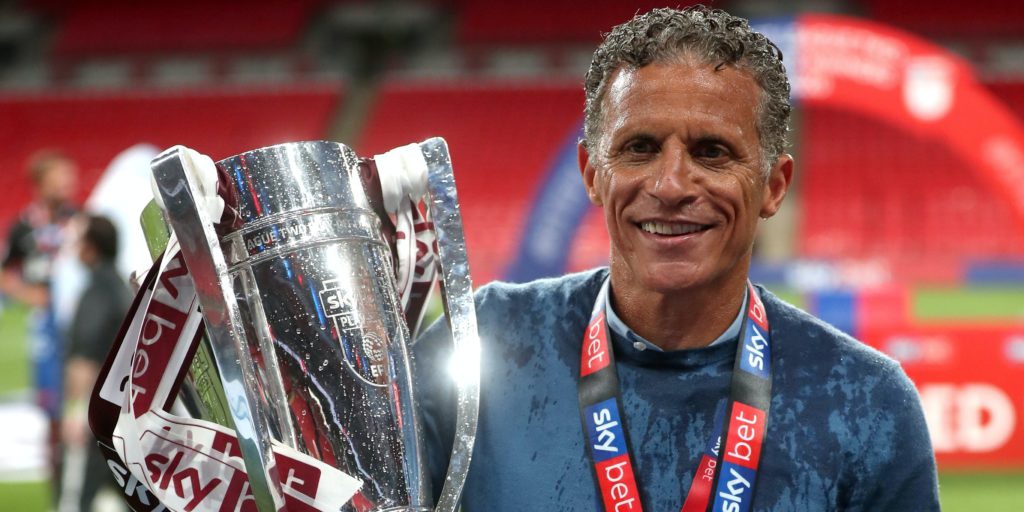 Keith Curle admits he is “proud” to have filled a void on his CV after guiding Northampton to promotion with a crushing 4-0 victory over 10-man Exeter in the Sky Bet League Two play-off final.

Northampton controlled the behind-closed-doors contest from start to finish to end a two-year absence from League One.

“Being selfish as a manager, I know I needed a promotion and everybody knew that and I don’t shy away from that.

“The chairman, when I came to the football club, I was honest and I told him, ‘I need a promotion and I need a club that believes what I’m going to try and do’.

“The chairman, the owners, they’ve allowed me to create an environment and a platform for me to work that is very enjoyable.”

Having lost on penalties to Huddersfield as Mansfield boss in this fixture in 2004, his current side never looked like repeating that disappointment following first-half strikes from Watson and Morton.

A 59th-minute red card for Dean Moxey following a late lunge at Watson effectively ended Exeter’s hopes of a fightback before Hoskins and Williams compounded their misery.

Curle admitted it was strange playing in a 90,000-seater stadium without fans and praised his players for executing his game plan.

“It is surreal and I sympathise and empathise with the supporters who weren’t able to be there,” said Curle.

“We’ve just repeatedly gone over our fundamentals. Credit to the players because sometimes it can be a little boring, a little bit monotonous but it’s how I work because if you get the fundamentals and the foundation right it gives you a platform.”

Exeter endured another miserable trip to the capital, losing a third League Two play-off final in the space of four seasons.

Grecians boss Matt Taylor was part of Paul Tisdale’s coaching staff for defeats to Blackpool in 2017 and Coventry in 2018.

He criticised his team for displaying a “fragile” personality and branded Moxey’s dismissal “embarrassing”.

“(We were) second best, physically dominated throughout. I’ve absolutely no complaints,” said Taylor.

“Full credit to Northampton in terms of (how) they went about it but I really did not like the effect it had on the personality of my team tonight.

“We knew what to expect. I picked the most physical team I possibly could, that’s the irony from tonight but we still could not cope.

“At 2-0 at half-time, I thought we had a chance if we started passing the ball. We started to do that second half but we disintegrated after that and that red card is embarrassing, to be honest with you.

“But that’s what they turn you into and the personality of the team was fragile tonight.

“We needed to be a team of men tonight and unfortunately we started off as men but quickly turned into boys.”