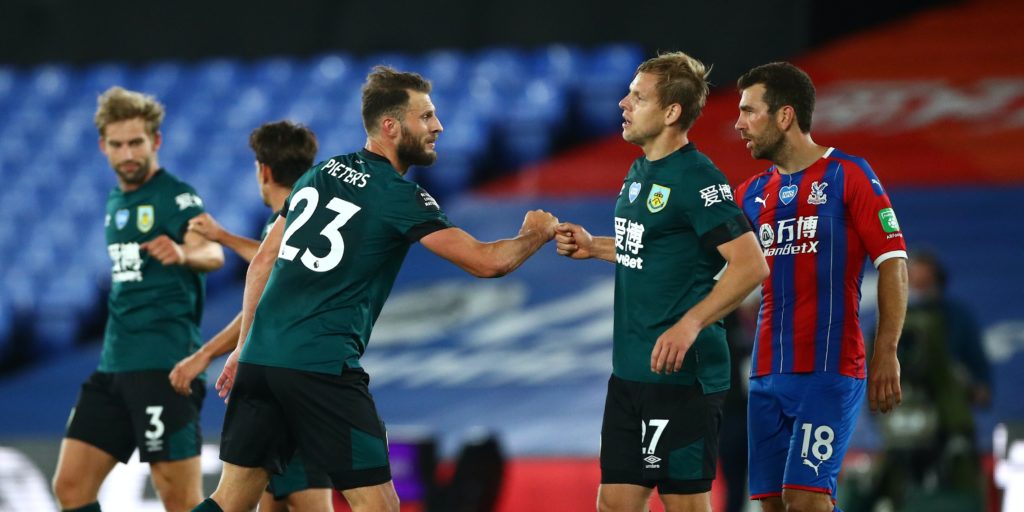 The Clarets were without Jay Rodriguez, Chris Wood and Ashley Barnes at Selhurst Park.

Sean Dyche believes his Burnley players are ready to embrace the challenge of battling for Europa League qualification despite a threadbare squad.

The Clarets made it back-to-back wins with a 1-0 victory at Crystal Palace on Monday after captain Ben Mee scored his first goal since January, 2017.

It moved the Turf Moor outfit up to eighth in the Premier League and level on points with Tottenham sparking talk they could return to Europe after finishing seventh two seasons ago.

Dyche was again only able to name seven substitutes at Selhurst Park, with Jeff Hendrick, Joe Hart and Aaron Lennon no longer at the club and Chris Wood, Ashley Barnes and Jay Rodriguez on the treatment table.

He said: “Having been through it (Europa League), it is very tough and you can’t really speak about it at the moment because you’ve seen how few players we’ve got so that obviously has to be addressed.

“That is a different ball game over the next few months and common sense.

“When you talk about the Europa, for the grandeur of a club like us making it is considerable.

“It does cause a lot of mental challenges. Of course we’ll have a short break in the summer as well this season because of what has gone on with the Covid-19 situation, so a lot of challenges.

“But the way we’ve built the mentality here is to keep winning or to tend to keep winning. It is not easy obviously but I think the players are open-minded and they will take each challenge as it comes.”

Jack Cork added to Burnley’s problems by coming off with an ankle injury at Palace, while right-back Matt Lowton is set for an extended period on the sidelines with a foot issue.

Forward Rodriguez could return for the visit of Sheffield United on Sunday and Robbie Brady, Wood and Johann Berg Gudmundsson will be assessed.

Dyche added: “I think the main thing is that’s 13 clean sheets and 13 wins. That sounds pretty good to me.

“If you get both ends of the pitch right, you’re probably going to have a decent season. It is one of those things that is awkward now because of the player situation.

“If we had the players with us, I think we could go even stronger until the end of the season.”

Palace will aim to bounce back against Leicester this weekend and will check on Christian Benteke after he missed a second game in a row with a thigh injury.

Since he suffered the issue in the 2-0 win at Bournemouth, the Eagles have lost twice and failed to find the net.

“He wasn’t close to being fit,” Roy Hodgson said of Benteke. “I will get to the training ground and check how it has been going for him.

“In the first game, where I thought it worked very well with our forward line, we lost Christian.

“As a result Andros (Townsend) has come in on the right and Jordan (Ayew) has played in a position where he is slightly less effective compared to when he plays in the wider position.

“It is a fact of life, Burnley themselves came here without a lot of their forward players.”