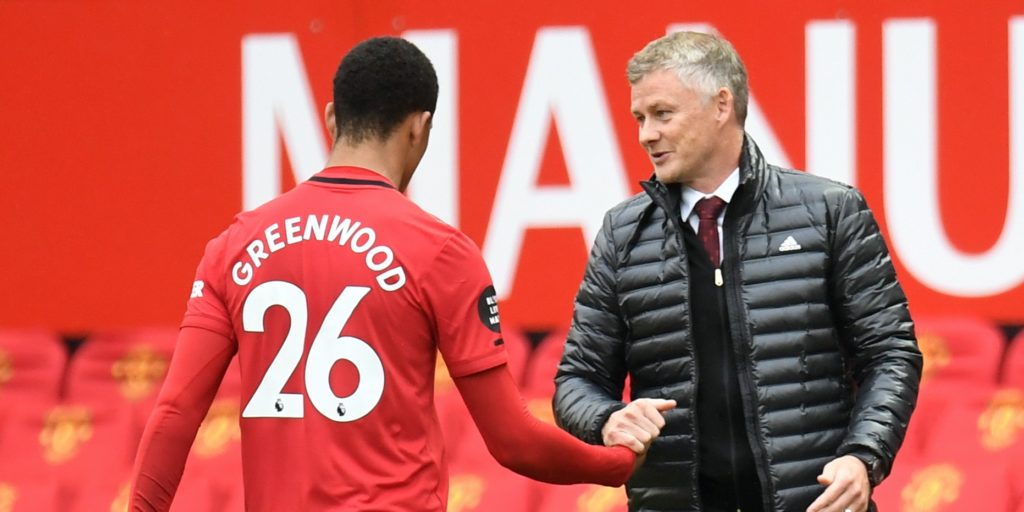 The Red Devils are unbeaten in 16 games in all competitions.

Ole Gunnar Solskjaer continues to be blown away by teenager Mason Greenwood – and believes Manchester United would have hit more than five past Bournemouth had the Old Trafford faithful been there.

The roaring Reds extended their unbeaten run in all competitions to a 16th match by walloping Eddie Howe’s relegation-threatened Cherries 5-2 in a thrilling clash played out in front of empty stands.

Junior Stanislas’ first of the season had given Bournemouth a shock lead at Old Trafford, only for Greenwood, Marcus Rashford and Anthony Martial to put the hosts in charge at the break.

Joshua King reduced the deficit from a controversially-awarded penalty, but United kicked on again as 18-year-old Greenwood notched his second before Bruno Fernandes completed the scoring with a fine free-kick.

“You can see when they go out on the pitch, they’re confident, they want the ball, they want to create chances,” Solskjaer said.

“We created chances, the energy of the team is fantastic. That performance in front of fans would be six or seven goals, definitely, because our fans give us extra energy and too bad they weren’t here today.”

United were purring at times on Saturday afternoon and scored five goals in a home Premier League match for the first time since December 2011.

Greenwood was the standout performer of a fine overall display, with his emphatic brace underlining his first-rate talent.

“We will always come back to his finishing because the goals were exceptional, the timings of them were great for us,” former striker Solskjaer said.

“Right foot, left foot, now it’s about getting headers in.”

Greenwood’s inexorable rise shows no sign of abating, with Solskjaer saying he is “one of the best – if not the best – finisher I have worked with and seen”.

Asked if he had known a young player with such power and precision, Solskjaer said: “No, I don’t think I have.

“I have seen Wayne Rooney at the same age and Mason is a specialist finisher and specialist goalscorer he knows exactly what to do with the ball when he’s on the pitch.

“If he shoots he will score, he is going to get better and his general play has improved.”

As good as Greenwood and United were on Saturday, there were times when relegation-threatened Bournemouth looked well placed to get a positive result.

Cherries boss Eddie Howe certainly saw some improvements from recent games, but there were some all too familiar, and frustrating, issues as well.

“Much better from the attacking sense,” Howe said. “We were a threat in the game today from start to finish.

“On the counter-attack we had pace in wide areas, front positions, scored a good goal so that was a big improvement on recent weeks.

“But defensively today once we conceded the first goal, that was not our finest hour.

“We know we’re in the Premier League and I think if you don’t get every detail right, you will find it difficult.

“I think the most disappointing goal for me is the first goal. I think we’ll look back at that as a key moment in the match.

“We had the lead and I haven’t seen the goal again but my gut feel is we didn’t deal with it anywhere near well enough.

“I think that changed the game in terms of momentum. I think the second goal was a harsh penalty to give against us. Third goal was an unbelievable finish.

“The really good thing is the beginning of the second half we came out with real intent, got back in the match. And the fourth goal probably knocked the stuffing out of us.”