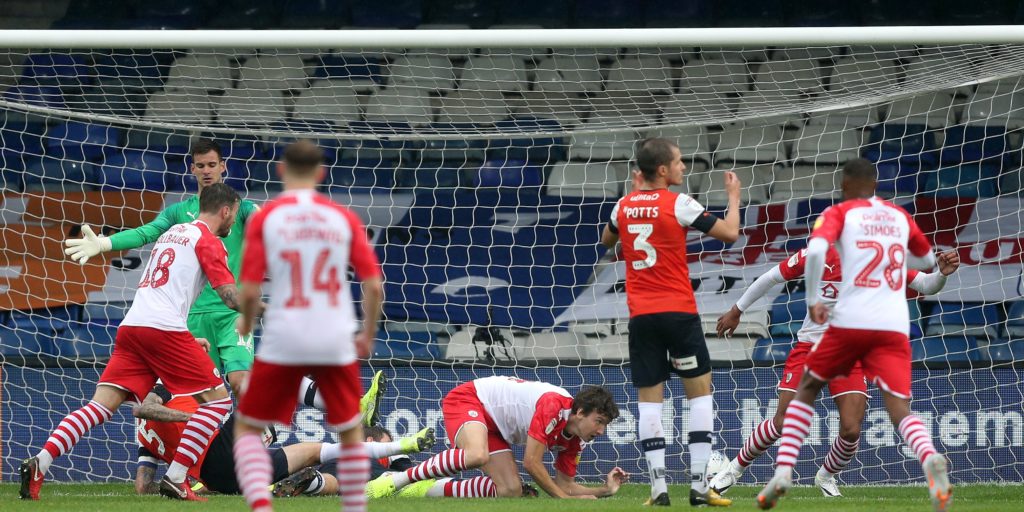 A late goal by Barnsley substitute Aapo Halme saw the Tykes salvage an important point at Luton in the battle of the Championship’s bottom two teams.

The draw leaves Luton at the foot of the table on 41 points, with Barnsley a single point better off – and now just three behind Hull in 21st.

The Tykes threatened first, Conor Chaplin’s header forcing Simon Sluga to tip over the bar early on, while Cauley Woodrow flicked the ensuing corner into the side-netting.

Sluga was then called into action again moments later as Barnsley broke well and he diverted Jacob Brown’s fierce drive over the bar.

Luton then went close themselves, Danny Hylton’s downward header from Pelly-Ruddock Mpanzu’s cross claimed by visiting keeper Jack Walton before it had the chance to creep in.

The hosts took the lead in the 13th minute as a lovely move on Luton’s right saw James Bree find Hylton, who played in Elliot Lee.

The attacker’s low shot hit the outside of the post where Luke Berry hammered the rebound into the top corner against his former club.

Barnsley pressed hard for a leveller, with Alex Mowatt’s free-kick hitting the wall, while Chaplin sliced a volley over from close range on his left foot and Woodrow’s effort was deflected behind by Sonny Bradley.

Still the visitors pressed, though, with Woodrow calling Sluga into action – the keeper turning his shot away and then producing a stunning save as the striker’s looping header looked like it was going to drop in, palming it against the crossbar and away.

After the break, Andrew Shinnie replaced Lee, and his dangerous cross just eluded Town’s forwards, while Brown whistled an attempt over for the visitors.

Berry’s free-kick could not beat the wall, while the midfielder then went close once more from James Collins’ clever hold-up play, his drive from the edge of the box not missing the bottom corner by much.

Barnsley were struggling to replicate the heights of their first-half play as an attacking force, with Brown’s tame effort easy for Luton stopper Sluga to gather.

However, they found a second wind thanks to some inspired substitutions by boss Gerhard Struber, one leading to the leveller in the 84th minute, when Halme fired home with his first touch after a disputed corner was not cleared.

Brown’s effort deflected just wide, while Luton should have won it with three minutes to go, Harry Cornick going clean through on goal but failing to beat keeper Walton who rushed out to save well with his legs.

Mowatt’s long-range shot was gathered by Sluga as although both sides threw men forward in search of a winner at the death, they had to settle for a point which leaves basement club Luton one point behind Barnsley.