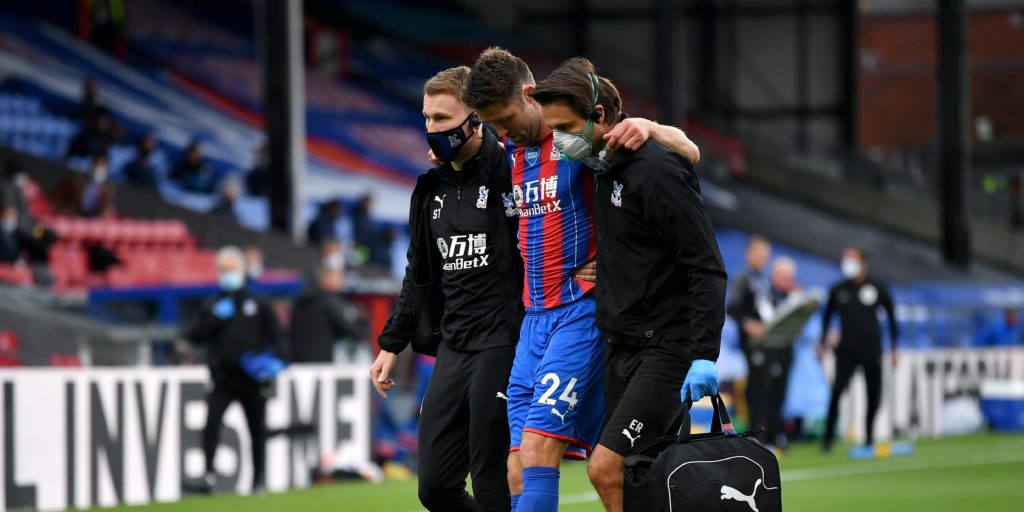 The former Chelsea defender suffered a hamstring injury during Tuesday’s 3-2 defeat to his old club at Selhurst Park.

Cahill went down while trying to track the run of Willian and the Brazilian went on to set up Olivier Giroud for the Blues opener.

He will go for a scan this week, but is not expected to feature at Aston Villa on Sunday or during any of the club’s final four Premier League matches of the campaign.

“It is a hamstring injury. He felt his hamstring give way,” Hodgson said.

“He will be assessed and receive a scan. I would be very surprised if there is not a tear in the muscle.

“I would be even more surprised – with such a short period of time to play the season – if he gets back to be a part of the four matches we have left.”

Since Cahill signed on a free transfer from Chelsea last summer, the ex-England international has been a virtual ever present.

His absence will be a blow for the Eagles and may force Martin Kelly to step up his recovery from a calf injury.

The versatile Kelly has not featured for Palace since January 21, but returned to training on Monday and could now be in contention for a place on the bench at Villa.

Mamadou Sakho replaced Cahill during the loss to Chelsea and produced an accomplished display alongside Scott Dann.

Hodgson added: “One feared the worse after losing Gary Cahill and them taking the lead in the fashion they did so early in the game.

“The players overcame the disappointment and the unbelievable bad luck and started playing well.

“To come back from 2-0 was a really good effort and I can’t fault anyone’s performance. On another day we would have won the game or certainly taken something from it.”

Chelsea manager Frank Lampard was pleased with the victory and felt his players did the right thing to carry on for the opener.

Willian appeared unaware that Cahill had gone down injured and found Giroud for the first goal after six minutes.

“I think they did the right thing to continue. I think any team would continue in that situation,” Lampard said.

“Willian was through on goal, naturally not looking to turn and stop and, if that was the situation, the game would be stop-start all the time.”

Christian Pulisic put the visitors in control after 27 minutes before Wilfried Zaha scored his first goal in 17 games to make it 2-1 at half-time.

Tammy Abraham was the next player to end his long wait to find the net again when he fired home off a post for his first goal since January 11 and it proved the winner.

Lampard added: “It was really important for Tammy because he is desperate for goals and hadn’t scored for a while. That can happen for a striker so it helps his confidence.

“He took it well and it is good for me. It gives me other options.”