Wolves remain in Champions League hunt after brushing Everton aside 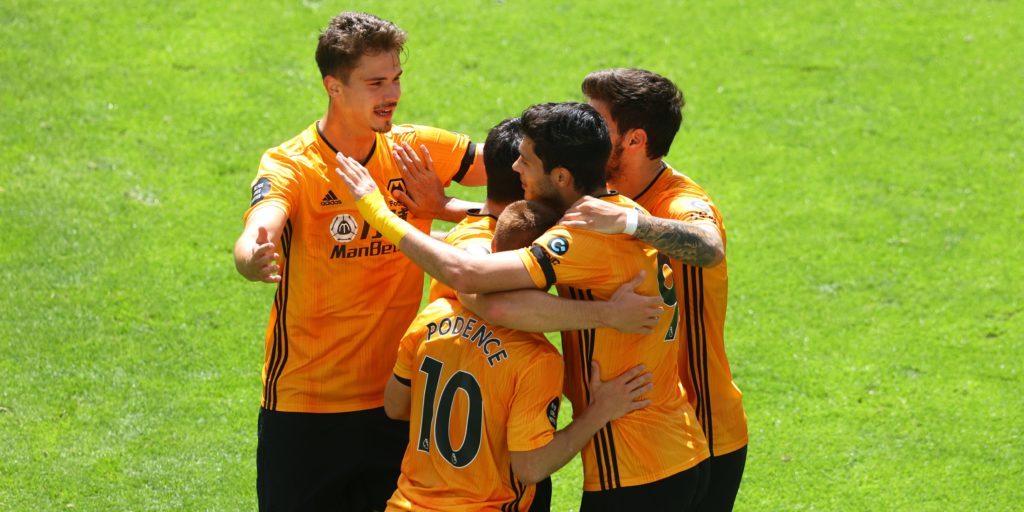 Nuno Espirito Santo’s side moved back into sixth following a comfortable 3-0 win.

Raul Jimenez’s penalty, his 25th goal of the season, Leander Dendoncker’s header and Diogo Jota’s strike gave them a routine victory against the disappointing Toffees at Molineux.

Nuno Espirito Santo’s side returned to sixth after Sheffield United had briefly overtaken them and they remain in the hunt for the top four with three games left, including a final-day trip to Chelsea.

For Everton, the season is reaching a sorry conclusion with the Toffees marooned in mid-table.

Wolves’ campaign started 12 months ago with a Europa League qualifier in Belfast but back-to-back defeats had threatened to derail their quest to reach Europe next season.

It was just the fifth time they had suffered successive top-flight losses since returning in 2018 but they rarely looked like slipping to a third straight reverse against an Everton side treading water.

With Tom Davies busy in midfield and Anthony Gordon showing flashes of why boss Carlo Ancelotti has trusted the academy product in recent weeks, the Toffees initially kept Wolves quiet.

Yet they failed to offer the service to Calvert-Lewin and the anonymous Richarlison, with the pair’s impact minimal in the extreme.

At least when the hosts did find a crack in the Everton back-line, Lucas Digne produced an excellent tackle to thwart Pedro Neto.

Pickford was then called into action after 26 minutes to turn Podence’s low drive behind at his near post as Wolves slowly began to threaten.

Everton defender Yerry Mina limped off, being replaced by Seamus Coleman, in a blow to the visitors who had allowed Wolves to grasp control.

But Nuno’s side had yet to find their top form since the restart and again lacked initiative and ingenuity until Digne’s recklessness provided them with the opener in first-half stoppage time.

The impressive Podence tricked his way into the area and Digne rashly clattered into the back of him.

Jimenez stepped up to convert the penalty for his 16th Premier League goal of the season. It continued to enhance his reputation and the striker has been directly involved in 35 goals in all competitions for Wolves this term.

It was just the sixth time Wolves had taken a lead into the break this season and they doubled it 46 seconds after the restart.

Pickford almost gifted Podence a third on the hour when he spilled his effort only to recover just before the ball squirmed over the line.

Jota blew a golden chance shortly afterwards when he stumbled with just Pickford to beat after being sent clear by Ruben Neves’ stunning pass.

Gylfi Sigurdsson had a shot blocked and Digne dragged wide as listless Everton tried to rouse themselves, but Wolves eventually won at a canter.

Jota grabbed his first goal since the restart to wrap up the points with 16 minutes left when Neves’ exceptional vision sent him clear and his low drive beat Pickford.

It could have been worse for Everton but Adama Traore hit the crossbar from six yards with the goal gaping with five minutes left.