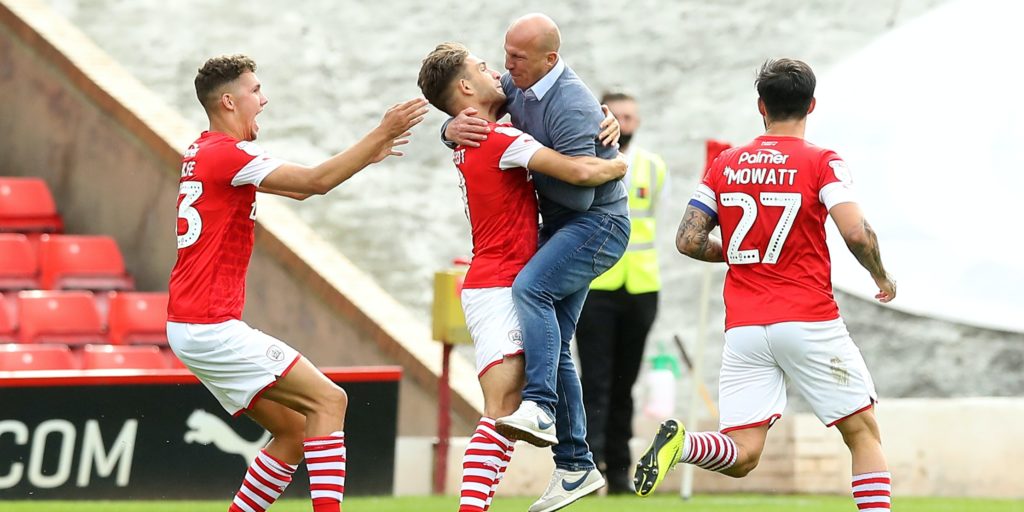 The Reds could yet survive in the Sky Bet Championship.

A stoppage-time winner from substitute Patrick Schmidt earned Barnsley a dramatic 1-0 victory over Nottingham Forest which keeps their survival hopes alive going into the final game of the season.

It was a spirited performance from the Reds against a Forest side whose play-off place is all but secured.

Barnsley had created a number of good openings before Schmidt struck, threatening inside the opening few minutes when midfielder Alex Mowatt saw a curling effort palmed away by Jordan Smith.

The Forest goalkeeper was soon called into action again, making a good save down low to his left to deny Luke Thomas.

Smith made a comfortable save to keep out Marcel Ritzmaier’s long-range effort.

Conor Chaplin then looked to capitalise on a mix-up in the Forest defence, but he fired wide from a tight angle.

Barnsley’s Callum Styles beat a couple of players before firing in a shot from the edge of the area which went wide of Smith’s right-hand post.

There was a let-off for the visitors when Styles just failed to get on the end of a Chaplin cross.

Barnsley were unlucky not to take the lead when Kilian Ludewig’s cross picked out Thomas whose first-time effort clipped the top of the crossbar.

Mowatt also went close with a 20-yard shot after being set up by Styles.

Forest also had a chance to force the breakthrough goal in the latter stages of the half when Tiago Silva’s low cross was met by Nuno Da Costa who flicked the ball goalwards, but keeper Jack Walton managed to get down smartly and keep it out.

Jacob Brown was put through by Chaplin just before the break, but he struggled to get the ball under control and that allowed Smith to clear the danger.

Barnsley head coach Gerhard Struber sent on 15-goal striker Cauley Woodrow in place of Ludewig at the start of the second half.

And Woodrow was soon involved in the action, firing in a shot which was deflected wide.

Forest boss Sabri Lamouchi made a double substitution 10 minutes after the restart, with Sammy Ameobi and Ryan Yates taking over from Costa and Silva.

Barnsley went close when Ritzmaier’s deflected long-range effort struck a post and Jordan Williams then tried his luck from distance, with the ball clearing the bar.

They threatened again when an effort from substitute Matty Wolfe was cleared off the line by Joe Worrall.

With less than 10 minutes remaining, a third Barnsley substitute was introduced as Schmidt replaced Ritzmaier.

The home side threw men forward in the closing stages and Schmidt snatched the winner deep into stoppage time, firing into the net following a scramble inside the area.