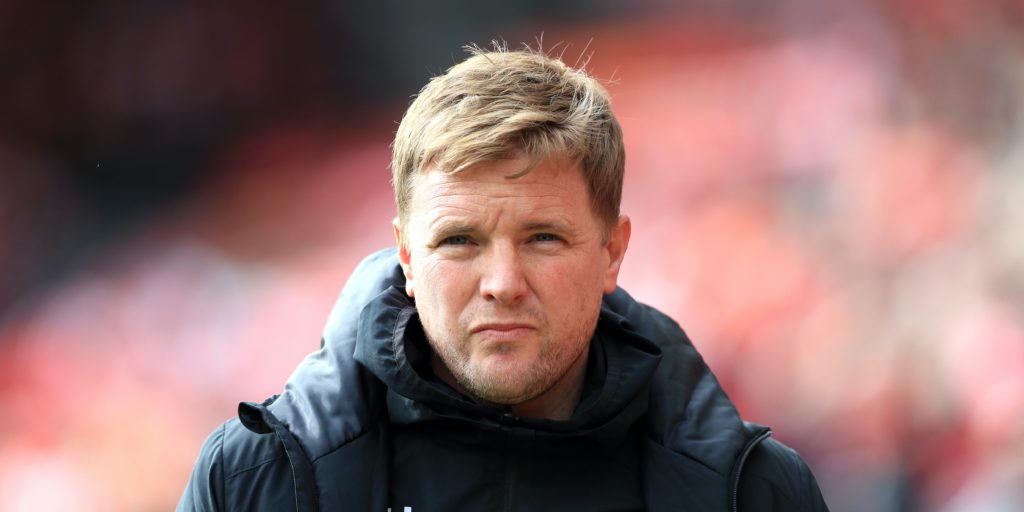 Bournemouth must win at Everton on the final day and need Watford to lose at Arsenal and Aston Villa to be beaten at West Ham in order to survive.

Eddie Howe has hinted he wants to continue as Bournemouth boss whatever happens in Sunday’s decisive Premier League relegation scrap at Everton.

The Cherries’ five-year stint in the top-flight now boils down to the weekend’s trip to Goodison Park, with Howe admitting he will sit down with the club’s hierarchy afterwards to plan the future.

Bournemouth must win at Everton and need Watford to lose at Arsenal and Aston Villa to be beaten at West Ham in order to survive.

Howe started his Bournemouth association as an academy graduate defender in 1994, and 26 years on the 42-year-old manager has insisted his dedication to the Cherries is as strong as ever.

Asked if he wants to be Bournemouth manager next season, Howe said: “My commitment to the club has never changed, from day one onwards.

“I do my best for the club, and that will not change.

“We go into Sunday, we’ll have a sit down at the end of the season, regardless of what happens, and see what happens next.”

Bournemouth’s relegation battle has taken its toll on Howe, his staff and players, with the club winning just once in 13 league matches.

The Bournemouth board’s respect and admiration for Howe remains high however, and the PA news agency understands club bosses will want him to stay at the helm even if the season ends in relegation.

Coveted Holland centre back Nathan Ake may not be at Dean Court next term, even if the Cherries pull off an improbable relegation escape.

The 25-year-old has been heavily linked with a summer switch to Manchester City, but Bournemouth boss Howe insisted Ake is solely focused on Sunday’s Merseyside trip.

Ake is battling to be fit however, and faces a race against time to shake off a groin complaint.

Asked about Manchester City’s interest in Ake, Howe said: “There’s going to be no comment from me on that, that’s not for me to comment on now.

“Nathan’s a big part of our squad, now whether he’s fit for the game, we’ll have to wait and see.

“So whether he’s fit enough to play from the injury side and from the fact he hasn’t really done anything in between the injury to now, so we’ll make a very late call on him.

“But at the moment he’s focused on trying to keep us in the league.

“He’s a very good player, but he’s our player, and he’s focused on trying to keep us in the league at this time.”

An upbeat Howe insisted Bournemouth can turn the tide of form and pull off the required win this weekend, but must then sit and wait and hope other results ebb their way too.

“There’s a belief that we can win our game, and that is the only thing we can control and that’s what we have to do,” said Howe.

“Now that’s easier said than done, our away form’s not been good for some time.

“A lot of those away games I think we’ve lost very narrowly, and some of those we look back on with huge frustration because we should have got more points than we have, but we’ve ended up on the wrong side of it.”