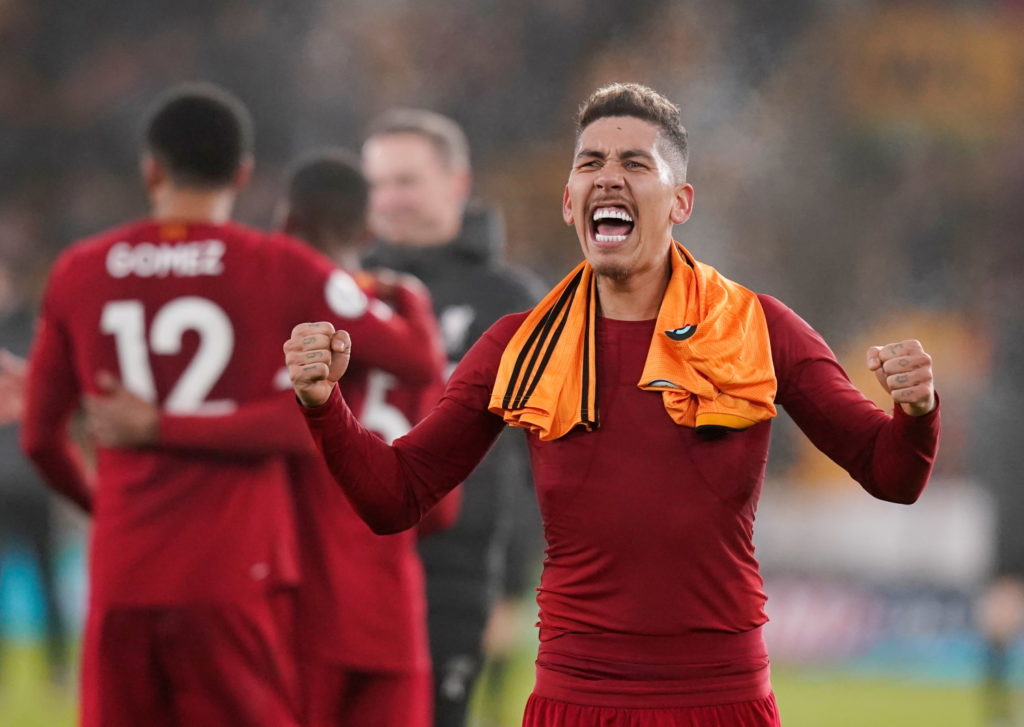 Roberto Firmino was Liverpool's match-winner late on at Molineux against a spirited Wolves side.

Despite falling behind inside 10 minutes, the home side were outstanding for much of the contest and they deservedly levelled early in the second half when Raul Jimenez cancelled out Jordan Henderson’s early header.

Wolves pushed Liverpool every yard in the second half but they were undone late on by a fine Firmino finish.

Wolves meanwhile had the carrot of knowing that victory would move them just three points behind fourth-placed Chelsea and firmly into the mix for a Champions League place.

As has been the case so often this season, Liverpool controlled the game from the outset and it wasn’t long before they went in front.

Trent Alexander-Arnold’s corner from the left was met by skipper Henderson, who appeared to glance it off his own shoulder before it flew past Rui Patricio into the net.

Any suggestion that Wolves might buckle having fallen behind was wide of the mark, the home side taking the fight to their all-conquering visitors during a high-octane and quality first 45 minutes.

Wolves could easily have been level with three minutes of Henderson’s opener.

Joao Moutinho and Ruben Neves worked a short corner and the latter found the head of Matt Doherty at far post, unmarked, but he headed across Alisson and wide of the upright.

Pedro Neto had a half-chance on 18 minutes, poking a shot goalwards inside the box, while the Reds rushed forward moments later and Salah almost found space in the box to double the lead.

A blow for Liverpool on the half-hour when Sadio Mane limped off, apparently with a slight hamstring strain, resulting in a Premier League debut for new signing Takumi Minamino.

Salah tested Patricio immediately after the interval, while at the other end Adama Traore continued to ask serious questions of Liverpool’s backline.

He was the supplier on 51 minutes following a slick move from the home side, teasing a cross into the box where Raul Jimenez was on hand to direct a header into the corner of Liverpool’s net.

The game was firmly in the melting pot now and, to their credit, both teams were chasing a winner.

Nuno Espirito-Santo’s team really pushed the unbeaten league leaders back and they had a great chance to go in front on 68 minutes, Jimenez darting onto a through ball from Traore but unable to beat Alisson from a tight angle.

Despite Wolves doing so much of the pressing, typical of their season, Liverpool edged in front again with six minutes to play.

Henderson picked up possession on the edge of the area and fed Firmino, who steadied himself before rifling a left-footed shot high into the top corner of Patricio’s net.

It was symptomatic of the Reds season. Klopp sent on Divock Origi in place of Salah late on and, with Wolves unable to find a second leveller that their attitude and performance would have merited, Liverpool’s relentless title march continues unchecked; though Diego Jota will wonder what might have been as he scooped over from close range in stoppage time.