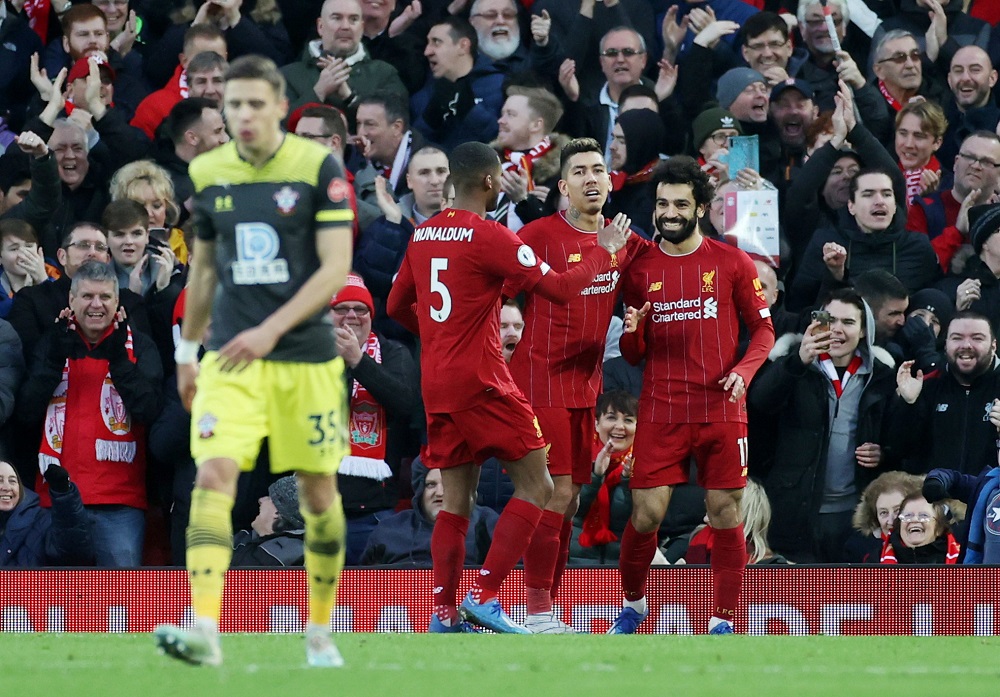 The Saints made four alterations from the XI who began the 2-0 win at Crystal Palace, their last league outing, with Danny Ings, Moussa Djenepo, Oriol Romeu and Jan Bednarek all handed starts.

The hosts enjoyed the better of the early possession although they found it difficult to break down a resolute Saints line-up.

Twenty minutes in and Mo Salah found space just inside the Saints area but his left-foot shot was deflected away for a corner by the alert James Ward-Prowse.

Five minutes later Georginio Wijnaldum was just unable to get a decent shot away after being played in by Fabinho, with Alex McCarthy making a comfortable save.

McCarthy then tipped away a deflected shot from Alex Oxlade-Chamberlain before the keeper kept out both Virgil van Dijk and Roberto Firmino in quick succession.

Former Reds forward Ings pounced on a defensive error to threaten for the visitors, only to see his shot blocked, before Shane Long failed to find his strike partner as the visitors threatened again.

Alisson then had to be alert to deny Ings as the visitors ended the first half in the ascendancy.

It took the hosts less than two minutes of the second half to make the breakthrough as Oxlade-Chamberlain drifted in from the left and his low, right-foot effort left McCarthy unsighted and unable to prevent the ball drifting into the net.

Salah then slotted home from a Firmino pass but a VAR check ruled the Egyptian to be offside as he ran clear.

However, it was 2-0 to the Reds on the hour as Firmino pulled the ball back from the left side of the area and skipper Jordan Henderson rifled the ball into the back of the net.

Salah made the game totally safe with a little under 20 minutes left to play, running on to a Henderson pass to slide his finish under the advancing McCarthy.

Takumi Minamino shot over when he should have done better before a scruffy finish from Salah from a Firmino pass completed yet another win for the champions-elect.