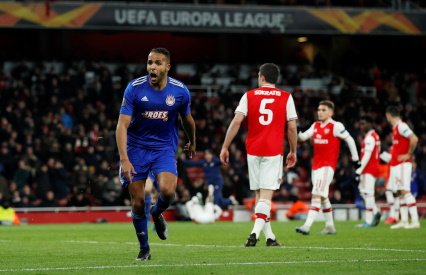 Arsenal are out of the Europa League after Youseff El Arabi's extra-time volley sent Olympiakos through on away goals in a dramatic finish at the Emirates.

Pape Abou Cisse had put the Greek outfit ahead in the 53rd minute when he headed home from a corner, and the game went to extra-time, with neither side able to find a way through.

Arsenal striker Pierre-Emerick Aubameyang thought he had done enough in the 113th minute, but Arsenal were left crestfallen as El Arabi wheeled away to celebrate his stunning goal.

In the first half, Alexandre Lacazette thought he had done enough but his tap-in in the 40th minute was ruled out for offside, with Bukayo Saka setting off too early before his cross.

Cisse’s header turned the game on its head at the start of the second half when he punished Arsenal for their poor marking from a corner.

David Luiz and Mesut Ozil were marking fresh air as Cisse raced into the box before heading past goalkeeper Bernd Leno. In the 77th minute, Lacazette should have done better with a low diving header, with the Frenchman only heading past the near post after a dangerous cross.

Both teams looked leggy and out of ideas in extra time, but Arsenal were given another warning when substitute Georgios Masouras rattled the crossbar after a quick counter-attack.

He was made to rue his miss when Aubameyang’s overhead kick sent the home fans wild, but the drama was not over in north London. After clearing a corner with a minute to go, Arsenal switched off at the back, and Masouras’ cross to the far post was met by El Arabi who found the bottom corner with a volley.

The majority of Arsenal’s team looked heartbroken, but there was still time for one final chance, and it fell to their star striker.

A double deflection in the Olympiakos box saw Aubameyang played in and the Gabon international had the goal at his mercy. He somehow fired wide as the full-time whistle sounded as Arsenal’s Europa League campaign ended in the most dramatic fashion with the tie ending 2-2 on aggregate.