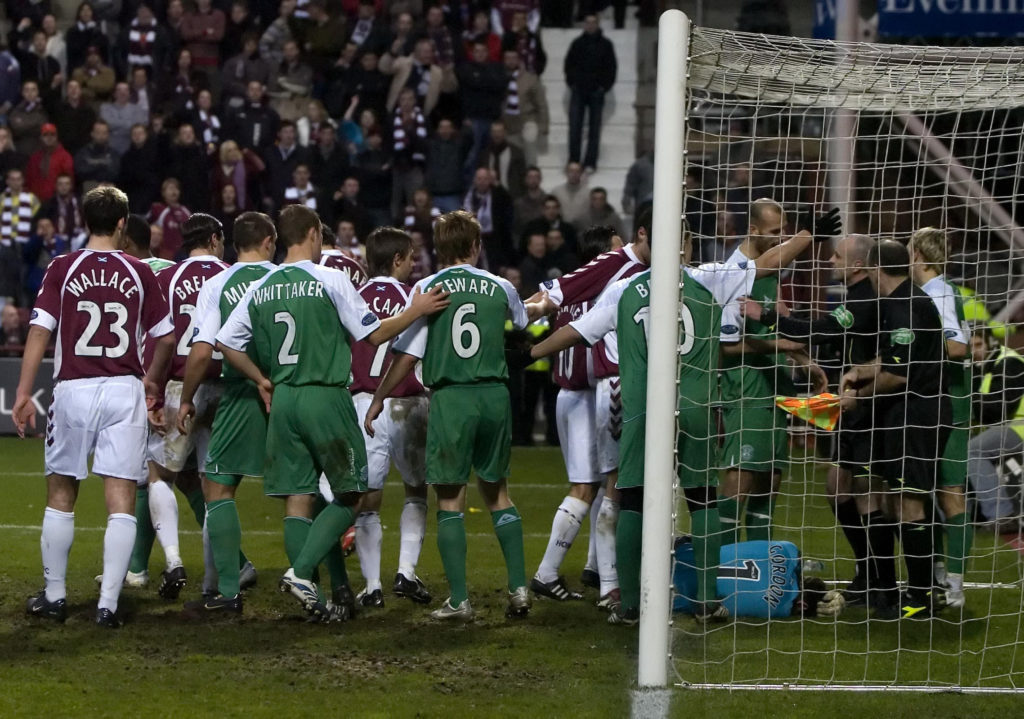 Hearts and Hibernian were set to battle once again on Saturday.

Hearts and Hibernian were due to meet at Hampden in the William Hill Scottih Cup semi-final on Saturday before the coronavirus pandemic forced the suspension of football.

Hearts triumphed in the first Scottish Cup final meeting between the teams and the only occasion the showpiece has been played outside Glasgow. More than 16,000 fans crammed into Logie Green in Powderhall, Edinburgh, home to St Bernard’s, while Hampden hosted a rugby international between Scotland and England. Both clubs had previously won the cup and Hibs survived a challenge from semi-final opponents Renton in the Court of Session that they had fielded an ineligible player. Davie Baird gave Hearts the lead with a third-minute penalty and they went on to dominate.

Eddie Turnbull’s team needed to win by six goals to go top of the First Division table above Jock Stein’s Celtic and they had five by half-time at Tynecastle. Jimmy O’Rourke, Arthur Duncan and Alan Gordon all scored doubles and Alex Cropley got the pick of the bunch with a 20-yard volley.

Mixu Paatelainen wrote himself into Hibernian folklore by scoring his side’s first derby hat-trick for 33 years. The Finn had already had a goal disallowed before his quickfire double cancelled out Andy Kirk’s opener. The future Hibernian manager finished off a flowing move after David Zitelli’s strike and Jon O’Neill and Russell Latapy added to the rout for Alex McLeish’s side.

Teenager Graham Weir earned Hearts a point with a stoppage-time double in the most dramatic conclusion to an Edinburgh derby. Hearts had already come back from two goals down before Craig James fired Hibs back in front in the 89th minute and Grant Brebner added to the lead in added time. But 18-year old substitute Weir pulled one back in the third minute of stoppage time and fired an equaliser 42 seconds later.

Paul Hartley struck a hat-trick in the first Edinburgh derby at Hampden as Hearts reached the Scottish Cup final. Hartley’s best goal came when he embarrassed goalkeeper Zbigniew Malkowski by whipping a free-kick inside his near post and Edgaras Jankauskas added to the scoring before Hibs imploded with Ivan Sproule and Gary Smith sent off.

Unquestionably the most memorable Hearts victory of all time as Hibernian’s Scottish Cup hoodoo continued in a one-sided Hampden final. Rudi Skacel hit a double, Darren Barr and Danny Grainger both netted their first goals for Hearts and Ryan McGowan was also on target. Hibs had left-back Pa Kujabi and manager Pat Fenlon sent off – the latter for gesturing towards Hearts fans.

Hibs atoned by knocking Hearts out of the competition in three of the subsequent five seasons with 10 minutes at Tynecastle proving pivotal in their history. Hearts paraded 2012 manager Paolo Sergio before the fifth-round tie and were two up at half-time thanks to goals from Arnaud Djoum and Sam Nicholson. But Jason Cummings headed home in the 80th minute for the Championship side and Paul Hanlon scrambled home in stoppage time. A Cummings goal earned Hibs a replay win and they went on to lift the trophy for the first time in 114 years.