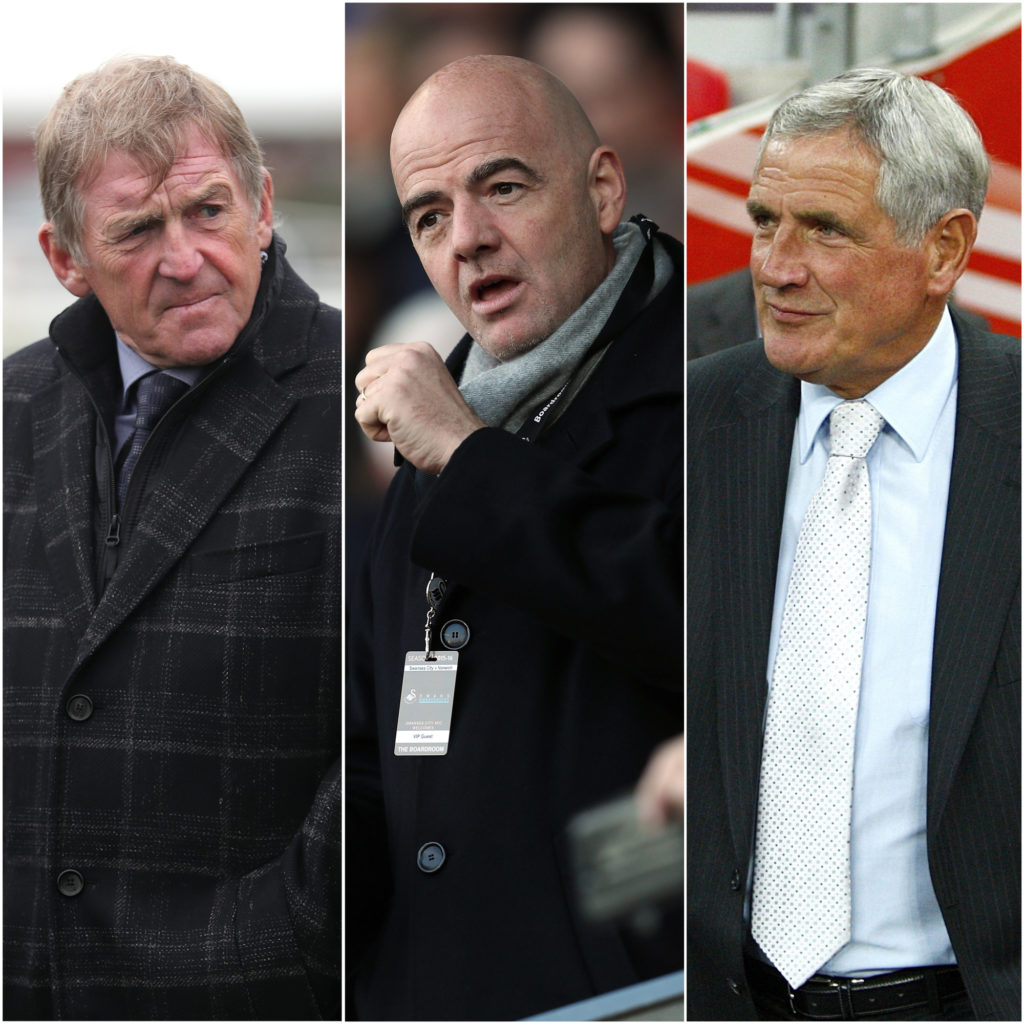 All areas of football are struggling to cope with the impact of the pandemic.

FIFA vowed to look at ways to help mitigate coronavirus’ impact on football on a day when greats Kenny Dalglish and Norman Hunter were confirmed to have tested positive for the disease.

With the worldwide death toll linked to Covid-19 hitting 100,000, there are few signs of the sporting landscape returning to normal anytime soon as countries across the world attempt to curb the outbreak.

All areas of football are struggling to cope with the impact, leading president Gianni Infantino to say FIFA had begun consultations on creating a fund with an independent governance structure which could distribute money in the game where needed.

Scottish clubs voted on the immediate future of the club game on Friday, with the SPFL proposing the immediate curtailment of the Championship, League One and League Two campaigns due to the coronavirus.

The resolution would also give the SPFL board the right to decide the Premiership on a points-per-game basis if the coronavirus was to prevent its resumption, but three clubs did not make their stance known by the deadline.

The body received 39 responses as of 5pm on Friday, with 85 per cent in favour of the resolution that is waiting on one deciding Championship club that failed to vote on a day when Celtic announced a package of measures to help safeguard the club.

One of the greatest players to don the green and white was confirmed as having tested positive for Covid-19 on Friday night, with Liverpool confirming that club great Dalglish was in hospital but asymptomatic.

A message on behalf of Dalglish and his family released by Liverpool said: “Sir Kenny was admitted to hospital on Wednesday 8 April for treatment of an infection which required intravenous antibiotics.

“In keeping with current procedures, he was subsequently tested for COVID-19 despite having previously displayed no symptoms of the illness. Unexpectedly, the test result was positive but he remains asymptomatic.”

Leeds confirmed on Friday that World Cup-winning former England defender Norman Hunter was also in hospital with the disease.

The 76-year-old, who made 28 appearances for the Three Lions and was part of the 1966 World Cup-winning squad, is undergoing treatment.

League Managers’ Association chief executive Richard Bevan told the BBC that the season should not resume until all players have been tested for Covid-19, while Friday saw West Ham become the second Premier League club to announce a wage deferral agreement with players.

West Ham’s first-team squad are deferring a percentage of their salaries, while manager David Moyes, vice-chairman Karren Brady and finance director Andy Mollett are taking a 30 per cent cut.

Meanwhile the Association of Professional Cyclists (CPA) has promised to work with teams and world governing body the UCI to mitigate the effects of the shutdown – but has ruled out accepting universal salary cuts.

A number of teams including Bahrain-McLaren, Mitchelton-Scott, CCC, Astana and Lotto-Soudal have already agreed cuts or payment deferrals with riders, while the AIGCP, a body which represents the teams, is seeking further measures.

Racing has been on hiatus since Paris-Nice ended one day early on March 14, with no clear sense of when it might return.

The Tour de France, a race seen as vital to the budgets of several teams, remains on the schedule for now, due to start on June 27, but organisers are exploring options to delay it until later in the summer.

On Friday, Team Ineos announced they were helping their parent company Ineos distribute free hand sanitiser to NHS hospitals after the chemical company converted some of its plants to produce it.

Renault Sport Racing also announced that the vast majority of staff at their Enstone base “will effectively have a total shutdown (furlough) until May 31st”.