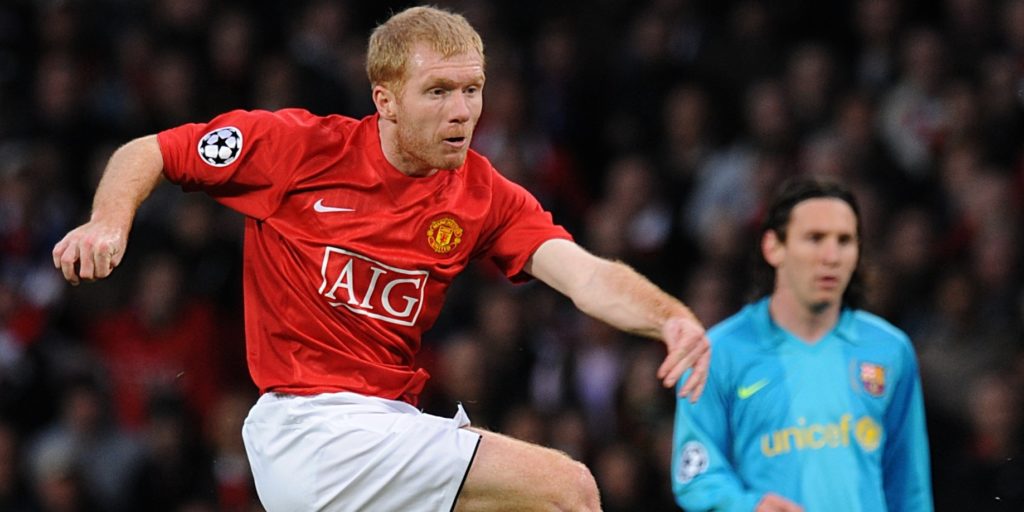 Paul Scholes signed a new one-year deal with Manchester United on April 16, 2010 in his final season before retiring for the first time in 2011.

He made his return in January 2012 before eventually quitting in 2013 and, here, the PA news agency looks at his best five goals for United.

Possibly Scholes’ most spectacular goal for United came at Villa Park two days before Christmas in 2006.

Ryan Giggs’ corner was headed away by Gavin McCann and Villa thought the danger was clear.

But the ball dropped from a height to Scholes, lurking 30 yards out, and he crashed – almost nonchalantly – a brilliant volley in off the underside of the crossbar.

Having drawn 0-0 in at the Nou Camp, United went into their semi-final second leg without the injured Wayne Rooney and Nemanja Vidic.

But Scholes settled the tie and sent United to Moscow – where they beat Chelsea on penalties in the final – to exorcise the demons after he was suspended for their 1999 victory.

It was another stunning long-range drive as he seized on Gianluca Zambrotta’s poor clearance to hammer in a 25-yard rising drive which flew past Victor Valdes.

Two Dwight Yorke goals had United cruising at Valley Parade in March 2000 before Scholes got in on the act in spectacular style.

David Beckham’s left wing corner found the midfielder unmarked on the edge of the Bradford box.

It was a pin-point delivery and Scholes took it first time with his volley screaming into the bottom corner.

Another Scholes piledriver came at the Riverside as he demonstrated his technique and unerring accuracy.

United were leading Middlesbrough 2-1 as Gary Neville pulled the ball back to Scholes 30 yards out.

What followed was an unstoppable effort which arrowed just into the top corner with Mark Schwarzer beaten.

This time it was Scholes’ deft touch which earned him another spectacular goal.

United were 2-1 up on Panathinaikos in the closing stages of their Champions League group game when Scholes latched onto Teddy Sheringham’s backheel on the edge of the area.

He then chipped over Antonios Nikopolidis to end a flowing team move and wrap up victory.