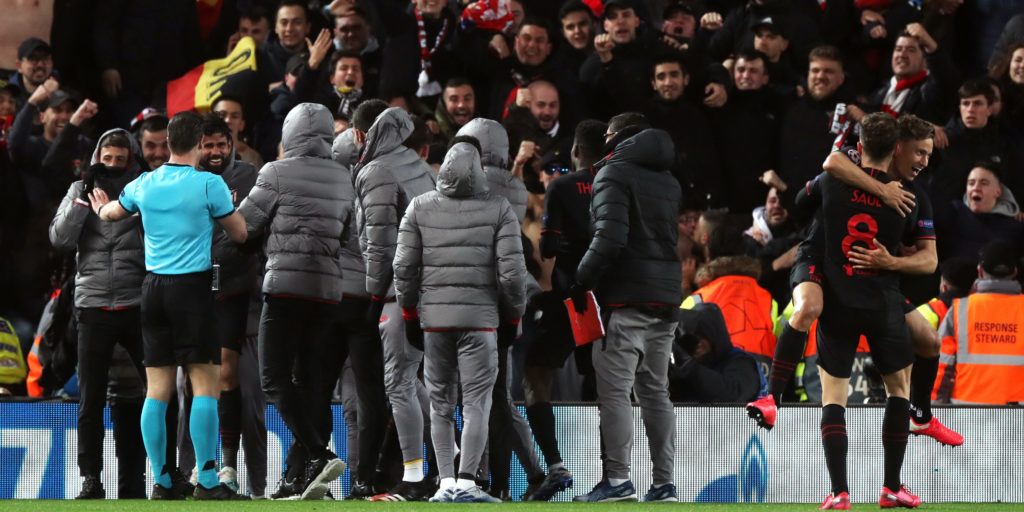 More than 3,000 away fans made the trip to Merseyside for the March 11 fixture, despite Madrid already being subject to partial lockdown.

Professor Dame Angela McLean, deputy chief scientific adviser to the Government, says it is an “interesting hypothesis” that Liverpool’s Champions League match against Atletico Madrid may have spread coronavirus in the city.

More than 3,000 fans made the trip from the Spanish capital to Merseyside for the March 11 fixture, despite their home city already subject to partial lockdown amid the Covid-19 pandemic.

McLean admits it will be interesting to look at the scientific evidence and the Champions League last-16 second leg tie at Anfield down the line, but pointed out that, given the general policy at the time, going to a football match was not considered a “particularly large extra risk”.

“However, when you get to the situation of our strange lives as we live them now where we spend all our time basically at home, of course you wouldn’t add on an extra risk of lots and lots of people going off to the same place at the same time,” she continued.

The Chancellor, Rishi Sunak, defended the Government for not having introduced a ban on large sporting events sooner, with Cheltenham Festival held between March 10-13.

“At every stage in this crisis we’ve been guided by the scientific advice and have been making the right decision at the right time,” Mr Sunak said.

“This is an unprecedented situation we’re all dealing with, I’m sure there are all things that we will learn from this.”

First Minister Nicola Sturgeon has warned that even action behind closed doors might be too risky during long-term social distancing as she told Scottish sports fans not to expect mass gatherings to resume any time soon.

Sturgeon admitted some form of social distancing could be required until a vaccine is ready, meaning the prospect of thousands of fans gathering at sporting events in Scotland could be ruled out for an estimated 18 months.

When asked about the prospect of crowds or closed-door events before a vaccine, Sturgeon said at the Scottish government’s daily briefing: “I’m not yet in a position to give you dates on when things will start again and in what order things start to go back to normal.

“But I would absolutely say that people should not be under the expectation that large-scale mass gatherings will be starting any time soon.”

Arsenal and Sheffield United have announced measures designed to minimise the financial impact of coronavirus.

Arsenal say they have reached a “voluntary agreement with our first-team players, head coach and core coaching staff to help support the club at this critical time” following “positive and constructive discussions”.

The north London club referred the PA news agency to their earlier statement when asked about reports that players, including Mesut Ozil, had not agreed to a pay cut.

The pair have been joined by senior coaching staff, who have also agreed to the deferrals for the next six months to assist United “with retaining staff and continuing to pay 100 per cent of their salaries during this difficult period”.

NHS staff and other key workers will be able to get tested at Twickenham via an appointment system, following the likes of the Tottenham Hotspur Stadium and the Amex Stadium in setting up testing facilities.

RFU chief executive Bill Sweeney said: “The RFU is pleased to be able to support the COVID-19 drive-through testing programme at Twickenham Stadium for NHS and other key workers.

“We receive tremendous support from frontline services during match days at Twickenham and we are grateful for the opportunity to be able to support key workers during this severe national crisis with the use of our site and staff to support operationally.

Rugby union players in Australia have agreed to take an average salary cut of 60 per cent until September 30, while a meeting of the International Cricket Council’s chief executives’ committee will be held via conference call on Thursday to discuss the likely impact of coronavirus on the global game.

The meeting, comprising each of the 12 full members nations as well as three representatives from associate cricket, will discuss a series of matters which could determine the shape of sport’s biggest events in the coming years.

World number one Novak Djokovic’s opposition to vaccines could stand in the way of his return to tennis once it resumes from the coronavirus pandemic.

A push is growing for all players to be vaccinated when tennis starts again, provided a vaccination is produced by then.

“Personally I am opposed to vaccination and I wouldn’t want to be forced by someone to take a vaccine in order to be able to travel,” Djokovic said in a live Facebook chat with several fellow Serbian athletes on Sunday.

“But if it becomes compulsory, what will happen? I will have to make a decision.”