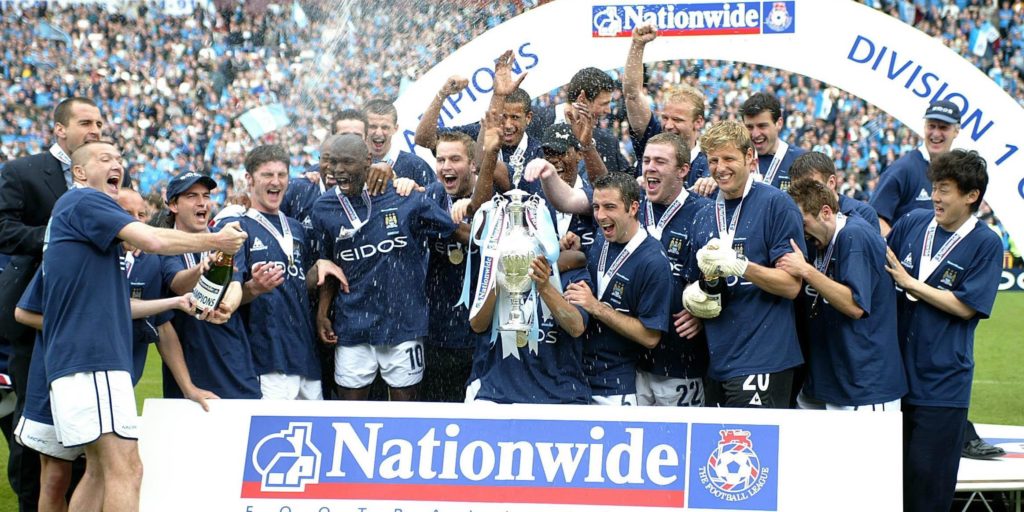 Man City celebrate promotion back to the top flight after a 3-1 win over Portsmouth in Stuart Pearce’s final match.

Manchester City celebrated winning the Nationwide Division One title by cruising to a 3-1 win over Portsmouth at Maine Road that also brought down the curtain on Stuart Pearce’s playing career.

Steve Howey headed City in front after only nine minutes and, after Darren Huckerby had rattled a post, Shaun Goater made it 2-0 in the 26th minute, claiming his 32nd goal of the season after being put through by player-of-the-year Ali Benarbia.

Goater was the first City player since Francis Lee in 1972 to score more than 30 goals in a season.

Courtney Pitt pulled a goal back for Pompey just before the hour from a Robert Prosinecki corner but Jon Macken made it 3-1 four mintues from time for City’s 108th league goal of the season, equalling their best ever tally.

Pearce, three days short of his 40th birthday, squandered a chance to sign off with his 100th goal when he blasted a penalty over the bar in injury time after a handball by Linvoy Primus.

But City, who finished 10 points clear of nearest challengers West Bromwich Albion, had plenty of reason to celebrate at the final whistle. Kevin Keegan’s men had bounced back to the top flight at the first attempt following relegation the previous season.