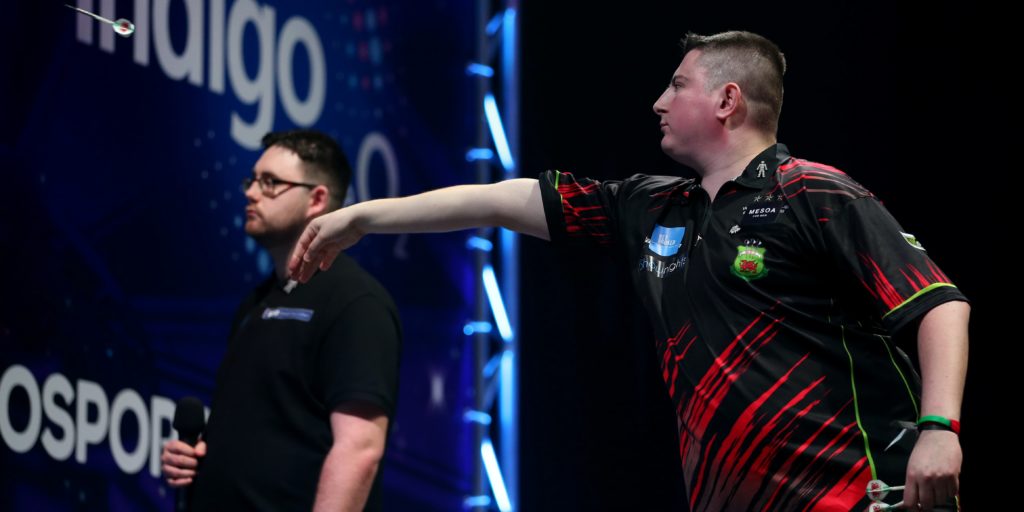 Kenny was the lowest ranked player in Group Five on Tuesday.

Kenny, the lowest ranked player on Tuesday, won the group before the final game after beating Devon Petersen 5-3.

The 27-year-old from Newport only joined the tour in January and is ranked outside the top 100 but also beat Luke Humphries 5-3 and Joe Murnan 5-2.

“I’m happy, on paper I’m the worst player in the group but it proves I can live with the big boys,” he said.

“Luke is a big boy and has lost in the quarter-finals of the World Championship twice and he is the best player out of all of us so I’m very pleased.”

Humphries finished second after beating Murnan 5-3 in the final game, despite losing connection ahead of his winning double, to leave him third and Petersen bottom.

Humphries added: “It wasn’t my best, I thought I would put in some really good performances and I should have beaten Nick but missed my chances. Hopefully I get another chance if the PDC continue doing another phase.”

Petersen said: “I always enjoy it, well done to Nick, it’s been fantastic and a great effort from the PDC. We want to give our best but sometimes situations like these are quite different. Hopefully I can get back to playing as good as I was.”

Humphries was favourite going into the evening but lost to the world 106 Kenny in the opener when the rookie broke him to go 4-3 up and then saw out the match.

Murnan provided another upset when he beat Petersen 5-1. Petersen hit his first 180 in the fifth leg but could not rescue himself as Murnan responded.

Kenny then moved top of the group with a 5-2 win over Murnan, while Humphries took a 5-4 victory against Petersen to give himself a shot of winning but it wasn’t enough to catch up.