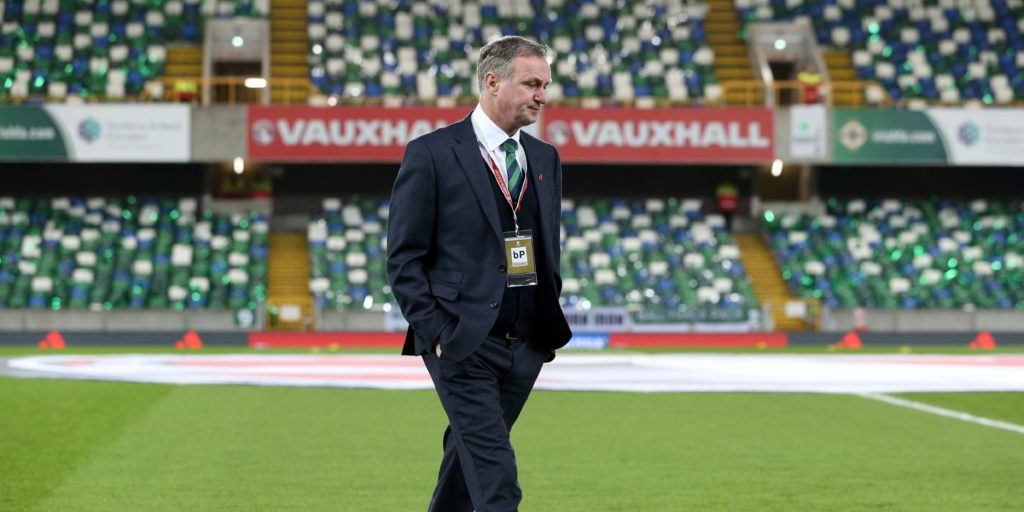 O’Neill stood down as Northern Ireland boss on Wednesday.

Michael O’Neill believes the redevelopment of Windsor Park played a key role in Northern Ireland’s upturn in fortunes during his eight-and-a-half year spell in charge.

O’Neill, who was named Stoke boss in November, on Wednesday stepped down as manager of the Green and White Army after it emerged their Euro 2020 qualifying play-offs – due to be his final games in charge – would not be played before October due to the coronavirus pandemic.

It ended a hugely successful spell in charge, highlighted by qualification for Euro 2016 but marked more broadly by consistency in results, with O’Neill’s win rate of 36 per cent second only in Northern Ireland’s history to Bertie Peacock’s 39 per cent between 1961 and 1964.

After O’Neill was appointed in late 2011, a major renovation of Windsor Park took place between 2013 and 2016, which O’Neill believes helped change his squad’s mindset.

“I remember at the outset one or two senior players coming to me to talk about the pitch at Windsor Park,” O’Neill said. “It was pretty evident they didn’t particularly enjoy playing at home in Belfast at the time.

“That’s understandable because the ground, for international football, there was very little behind the dug-outs that could be used.

“There was a portable stand behind the top goal and basically it was pieced together into what was usable. I don’t think any of that situation with the stadium helped the team or previous managers.

“I remember the time when Portugal came to play us and they didn’t have enough room to get their stuff into the dressing room.

“Things like that I used to think would help us but ultimately our mindset changed with the stadium and the team grew and I think that was shown with our performances.

“If you look back there are not many games since the redevelopment of the stadium when the team played poorly and the players didn’t play with a tempo and an energy.”

While he waits for news on when Stoke’s Championship campaign might be able to resume, O’Neill can take some time to reflect on his Northern Ireland reign.

But while he can pick out certain games as highlights – beating Greece to reach Euro 2016, drawing away to Portugal in 2012 or beating Russia in 2013 – O’Neill pointed instead to the pride he helped restore in playing for the Green and White Army.

“Having the mindset of every time we took to the pitch, especially at home, we felt we could win,” he said.

“We sometimes had to fight for our lives but other than the last game (a 6-1 defeat to Germany in November) when we were under-strength, no one wiped the floor with us.

“I take great pride in beating Azerbaijan 4-0 at home (in November 2016) and then playing a friendly with Croatia. Jonny Evans went home because his wife was having their second child but he flew back in on the Tuesday morning to play in the friendly.

“That just wouldn’t have happened in the past and when you see that commitment, that’s when you know you were going in the right direction.”

With the manager gone and some key players nearing the end of their careers this could be the end of an era, but O’Neill expects the likes of Steven Davis, 35, and Evans, 32, to keep going for a while yet.

“I know Steven will play on and break Pat’s record,” he said, with Davis two caps shy of Pat Jennings’ record of 119 caps for Northern Ireland.

“Jonny has ambitions to get 100 caps (the Leicester defender has 84) and more, and there will be others.

“The players still have an awful lot to play for. My biggest regret in my playing career was not getting more international caps.”