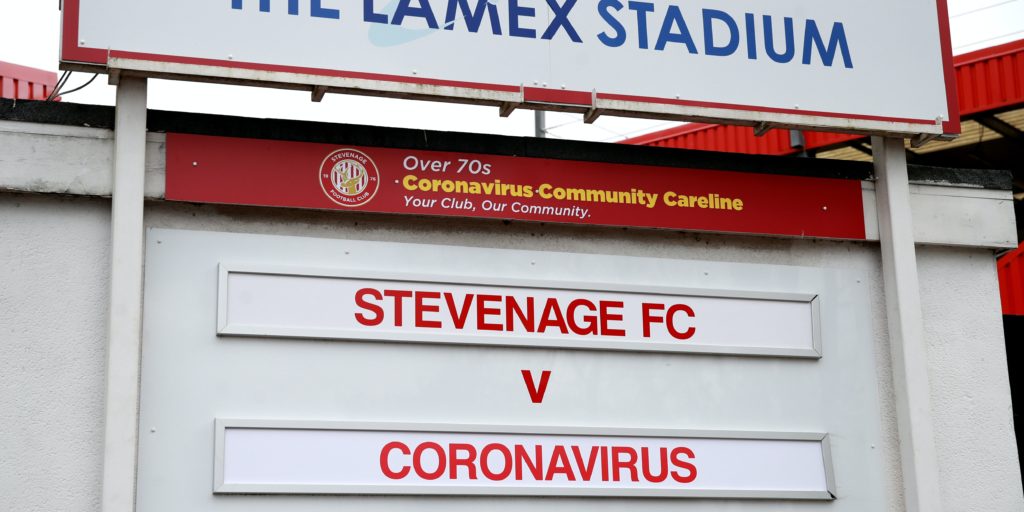 The EFL is yet to set a date on when games will resume.

Players will not risk their careers if the season goes beyond June 30, Stevenage chairman Phil Wallace insists.

The English Football League has been postponed since March 14 because of the coronavirus pandemic, with no date set for a return.

The race to finish the season is complicated with more than 1,000 players are expected to be out of contract by the end of June.

In anticipation of that, Colchester have already decided not to re-sign their out-of-contract players, with chairman Robbie Cowling accepting it will make his side “less capable” when the season resumes.

For their part, Stevenage are bottom of Sky Bet League Two and have just two contracted players for next season and Wallace questioned how the EFL can finish the campaign if players will not play.

He told the PA news agency: “All you can do is have an aim, we’d love to finish the season if we are able to in a safe manner. How we are going to do that is beyond me, given the timeframe with players out of contract.

“On July 1, Stevenage have two contracted players. What is supposed to happen then?

“You have some people say ‘surely they will play in July’ – no they won’t. Why would they risk their careers if they are not on contract?”

“I will make the commercial decisions in the best interest of our football club commercial survival.

“It’s probably the best part of GBP 250,000 you’re talking about (to pay players for an extra two months). You know how long I can feed doctors and nurses and the old people in my community with that?”

The EFL and the Professional Footballers’ Association, have made a recommendation for players in Leagues One and Two to agree a wage deferral of up to 25 per cent for April as they try to ease the financial burden on clubs.

Some have also questioned how clubs would fund themselves if there are no gate receipts during any return but Wallace is not concerned with finances yet.

He said: “It’s just money, I’m not being flippant. It’s money and solvable. If you start giving coronavirus to someone and exposing players to it that’s irresponsible.

“Every club has players with asthma, players’ wives with asthma, pregnant partners – some live with their mum and dad. If you are going to put people together in a contact sport you have to know no-one has got coronavirus.”

Wallace also believes clubs are powerless to determine when they will return.

“It’s got nothing to do with our league position, events – in this case the virus – will make this decision,” he said.

“Nobody knows, the question is impossible to answer. This will not be decided by people.”

At Colchester, Cowling added: “Luke Prosser, Frank Nouble, Ryan Jackson and Brandon Comley are the most notable players that this has affected and I have nothing but good things to say about all of them.

“I would have no hesitation in reversing the decision if there were to be a dramatic change of circumstances.”