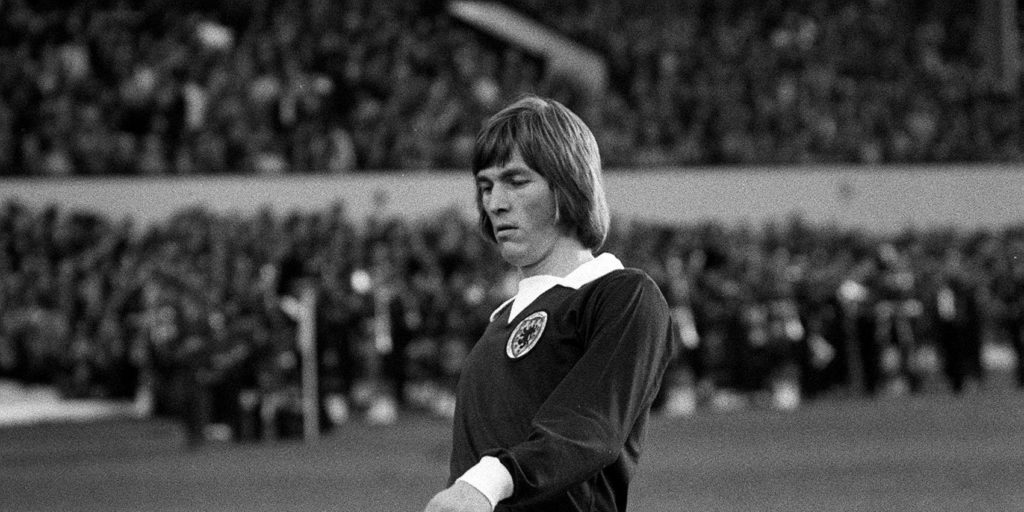 Denis Law and Sir Kenny Dalglish share the record for most Scotland goals.

Scotland could have been looking forward to their first major finals of the century had it not been for the coronavirus pandemic.

Steve Clarke’s men still have a Euro play-off campaign to look forward to but in the absence of any clarity over the date, the lockdown has been a chance to reflect on past glories.

Here, the PA news agency attempts the task of selecting the 10 greatest Scotland players – based on their contribution to the national team rather than club achievements.

A superstar regarded by many as the best player in the world, Jackson won 15 of his 17 internationals and lost only one. He tasted victory over England four times – netting a winner in 1926 and hitting the first hat-trick at the same stadium two years later as the ‘Wembley Wizards’ beat their hosts 5-1. The winger, who won a league title with Huddersfield, scored eight Scotland goals but had only just turned 25 when he won his final cap. A row with the English league meant Scotland did not select him again and his career came to an abrupt halt two years later after a wage dispute with Chelsea.

The prolific striker’s goals carried Airdrie to their only Scottish Cup win and Newcastle to their last league title in 1927, and his international record was extraordinary. The 5ft 5in forward, who started working down the mines aged 15, hit 23 goals in 20 internationals. He struck a double in Scotland’s 2-0 win over England in 1925 and was on the winning side in five of seven ‘Auld Enemy’ games including that 5-1 Wembley victory. In the only game he played against opposition from outside the Home Nations, Gallacher netted a double in 2-0 victory in France.

The first Scotsman to break the 50-cap mark, Young was part of Rangers’ famous ‘Iron Curtain’ defence and captained his country on 48 occasions. In the days when selection committees picked the team, Young’s influence was huge. The powerful defender made 53 appearances between 1946 and 1957 but was unfortunate not to feature at a World Cup. The Scottish Football Association declined to travel to the 1950 finals in Brazil after qualifying behind England, despite player protests led by Young. He was not part of the 13-man squad for the 1954 World Cup finals after being taken on a North American tour by his club. And his international career ended after he helped Scotland beat both Spain and Switzerland on their way to the 1958 finals.

The Manchester United great is Scotland’s joint top goalscorer with 30 goals in 55 games. He made his international debut aged 18 and finished it off at the 1974 World Cup finals 16 years later. Highlights included four-goal hauls against Northern Ireland and Norway, a strike in a 6-2 win over Spain in Madrid and goals in three consecutive games against England culminating in Scotland’s 1967 Wembley win.

The midfielder wrote himself into Scottish football folklore with his performances in two Wembley wins, and was also on the winning side in two Hampden ‘Auld Enemy’ successes. The then Rangers player scored a double as 10-man Scotland won 2-1 in 1963 and his ball-juggling skills epitomised his side’s superiority in the famous 1967 triumph. He would make his 34th and final international appearance later that year at the age of 28 as the effects of an earlier broken leg and flamboyant lifestyle took its toll.

The driving force of Don Revie’s great Leeds side, Bremner captained Scotland in their unbeaten 1974 World Cup finals campaign, coming close to netting a winner against Brazil as a rebound flashed in front of him. The 5ft 5in midfielder made up for his height disadvantage with an abundance of determination and skill.

‘King Kenny’ more than earned his moniker for Scotland, winning a record 102 caps from his debut in 1971 and equalling Law’s goalscoring haul in style with a superb goal in a World Cup qualifying win over Spain in 1984. The Celtic and Liverpool great played in three World Cups before withdrawing from the squad for Mexico 86 through injury.

The full-back played for Scotland in five World Cup finals ties and never lost one. The long-serving Celtic skipper missed the 1978 tournament through injury but recovered to make his second finals in 1982. A marauding right-back in the days when many in his position did not venture far forward, he was so good he won many of his 62 caps at left-back to accommodate Sandy Jardine.

The former Leeds and Manchester United striker is among a select band of players to have scored in three World Cup finals tournaments. His goal against Czechoslovakia in 1973 also sealed Scotland’s place at the event for the first time in 16 years. There are more talented players outside the top 10 but Jordan’s commitment was unmatched and he was a firm favourite with the Tartan Army, netting 11 goals in 51 caps.

Another to have played in three World Cups, the former Liverpool and Sampdoria midfielder combined fierce tackling with composure and accuracy on the ball. A three-time European cup winner, Souness won 54 caps.