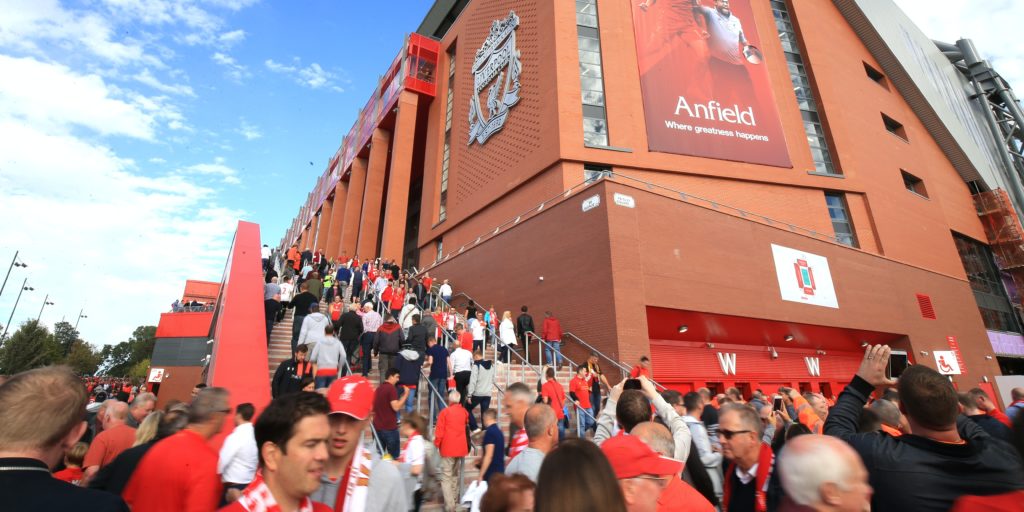 Fears over mass gatherings may mean season-defining fixtures being moved away from original venues.

Liverpool could be denied the opportunity to seal the Premier League title at Anfield if public health concerns are factored into where the final matches of the 2019-20 season are played.

Top-flight clubs will hold further talks on how the season can be restarted amid the coronavirus pandemic at their next shareholders’ meeting on Friday.

Part of the ‘Project Restart’ discussions will centre around the use of approved venues, which may mean teams playing on neutral grounds and immediately throws up questions over competition integrity.

Brighton chief executive Paul Barber says being unable to play all games home and away as planned would be a “further imperfection” on top of the already accepted imperfection of playing behind closed doors.

The UK’s national football policing lead Deputy Chief Constable Mark Roberts told the PA news agency on Wednesday that playing all the remaining matches at their original venues would “present challenges” to the emergency services already stretched by the Covid-19 outbreak.

There would be particular pressure points from a health and public order perspective on a match where the league title or another season-defining issue was on the line, because of the potential for mass gatherings of supporters. DCC Roberts said that will be in the league’s thinking.

“In the first instance, football has to satisfy the Government that they can hold the matches and that it’s safe for everyone to do it in terms of players, officials, coaching staff, broadcasters,” he said.

“So you get that first stage of ‘how do you make it safe to play football at the location?’ And it may be that actually that mandates them being played at specific neutral venues where it can be controlled.”

The mayor of Liverpool, Joe Anderson, told the BBC on Thursday he would be concerned about large numbers of supporters congregating at Anfield – in breach of rules around social distancing and mass gatherings – even if the decisive match was not played there.

Liverpool have responded to those comments with “disappointment”.

They said in a statement: “As a club, we are aware of and disappointed by comments attributed to Mayor Joe Anderson in a media interview which was published today.

“As well as a lack of evidence to support such claims, we would also point to recent discussions with Mayor Anderson relating to the possibility of any behind-closed-doors football, which concluded that it is important that key stakeholders across the city continue to engage and work collaboratively.

“In recent weeks, we have engaged with supporters’ groups who have informed us of their determination to respect social distancing measures and, in the event of a resumption of football being announced, we would continue to work with them and other key stakeholders in keeping with our collective desire to achieve this crucial objective.”

Brighton chief Barber said: “We would expect to play our remaining five games at the Amex that is an absolute priority for us. You expect to play an equal number of games home and away.

“Whatever ends up being the end to the season is going to be imperfect and for us that imperfection will almost certainly be playing behind closed doors. What we don’t want is a further imperfection of having to play at a neutral venue.”

Regular testing is another key part of the restart plans both at the Premier League and EFL level. Though the Premier League will fund the purchase of these tests, it accepts that can only be done when there are sufficient tests available to ensure none are being taken away from the areas of society which need them most, in particular the NHS frontline.

It has been reported that as many as 66,000 tests would be needed at EFL level.

The Daily Mirror quoted from a document drawn up by the league’s director of football Richard Garlick which calls for players to wear face masks at training, and for training equipment to be disinfected by staff wearing personal protective equipment (PPE).

Further consideration will also need to be given to where players and staff should be based if and when matches restart – whether at home or effectively quarantined in hotels.

Barber added: “If we were in a situation where it was necessary to lock players up for two months that would suggest to me that the country is not safe. For me that doesn’t make sense, it is illogical.”

Premier League medical adviser Mark Gillett and Football Association head of medicine Charlotte Cowie will be involved in a separate meeting involving medical officials from a range of sports, along with representatives from Public Health England.

The meeting, which will be led by the Department of Digital, Culture, Media and Sport, is understood to be taking place on Friday, in a sign of the Government’s apparent commitment to restarting professional sport where it is safe to do so.

In the Premier League, it is understood there remains the desire to retain video assistant referee (VAR) support for the final games and that social distancing guidelines will be followed in setting up the officials, either at the Stockley Park headquarters or on-site at stadiums.

Discussions will also continue on the various player status issues created by the indefinite extension to the season.

Huge uncertainty surrounds players whose contracts expire on June 30 and loan returns, while decisions must also be made on whether Hakim Ziyech, who officially becomes a Chelsea player on July 1, would be eligible to feature in the 2019-20 season or would have to wait.

Ziyech joins Chelsea from Ajax in Holland, where the season has already been ended by a government order.