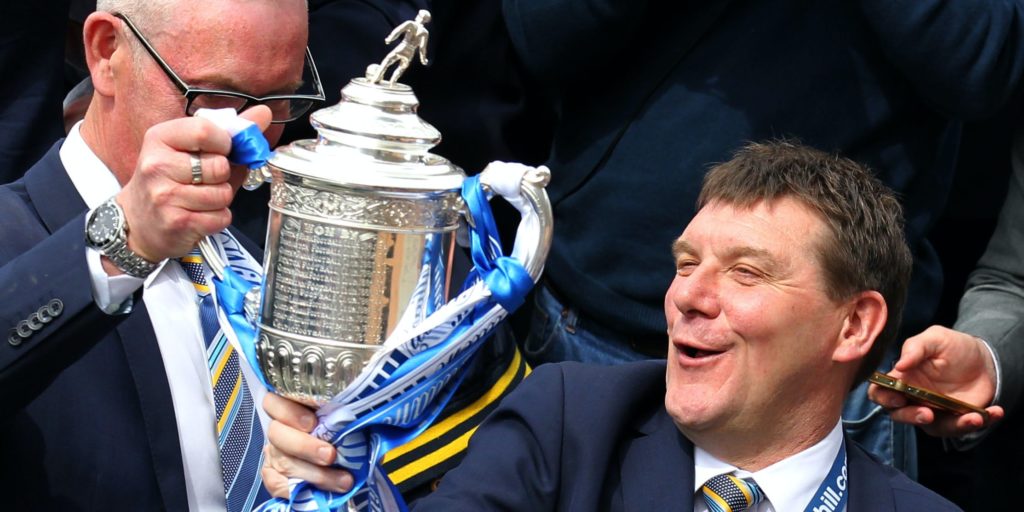 The Northern Irishman took over as manager in June 2013, after initially joining as assistant, and guided the club to Scottish Cup success in 2014.

Tommy Wright admits leaving St Johnstone was not easy but thinks it is the “right time” as he ended his seven-year tenure as manager.

The Northern Irishman led the Perth side to their first-ever Scottish Cup success in 2014 and guided the club to several top-six places in the Ladbrokes Premiership.

Wright took over as manager in June 2013, after initially joining as assistant to Steve Lomas in 2011, and he still had two years left on his current contract.

Plans were already in place to leave the club at the end of the campaign, and he has decided now is the time to part company during the coronavirus lockdown.

Speaking to Saints TV, Wright said: “It was extremely difficult, obviously being at the club so long I’ve got a lot of feelings for the club, lots and lots of happy memories and worked with a lot of good people both on the pitch and off the pitch.

“It was something that was being considered for a while, even as far back as at the end of the season when we finished eighth (in 2017-18).

“We sort of made a decision to see if over the next couple of years we could bring the age of the squad down and it might be time for me to move on. Fortunately, we have done that. There have been two good seasons.

“It’s been something that I felt that when you are at a club for a long period of time, sometimes there comes a point where you need a break and I do need a break.

“It’s a tough job. People don’t give you sympathy being in football management, but it’s 365 days and 24 hours a day and I just felt that this season, if we did well, it would have been the perfect time for me to leave the club in a really strong position.

“The future is really bright on the pitch. I won’t be the one that will take the team forward but I think that could be good, not only for me but for the club and team as well.

“Hopefully, I think it can be a top-six side and in a really good position. It hasn’t been an easy decision but I think it is the right time.”

Wright reminisced about St Johnstone’s only Scottish Cup success to date in 2014 when they defeated Dundee United 2-0 at Hampden Park and the club’s adventures in the Europa League qualifying rounds.

“I actually had no doubt that we wouldn’t win the game,” Wright added. “I just had this feeling that it was written in the stars that it was my first season, 50th game and all that. It just felt that we couldn’t lose that game.

“Once we got the second goal, I knew there was no chance we would concede two goals and it was just total relief and you can enjoy it.

“When the final whistle went, it was probably the happiest moment of my life.

“The disappointment of Europe, which still irks me, is that we got beat to teams (that we should have beaten). We beat Rosenborg, go out to Minsk; beat Luzern, go out to Trnava.

“If it was the other way round, I don’t know if you would get as much satisfaction, but there is always that wee bit of disappointment.”

The 56-year-old insisted he has a good relationship with chairman Steve Brown and it was his decision to end his nine-year association with Saints.

“There hasn’t been that many downsides. It’s been a great job. I’ve had great support,” the Northern Irishman continued.

“It’s not a normal manager-chairman relationship. He has supported me immensely. During a period earlier this season, which was the worst run, particularly with the timing of it, he never once put me under any pressure.

“And that shows that I had trust in the players and he had the ultimate trust in me as a manager.

“The relationship is fine. We spoke this week, we spoke over a period of time and it is something that I actually feel that the timing of it is right, right for the club.

“Seven years is a long time to have the same manager. People have to realise that sometimes things come to a natural end.”