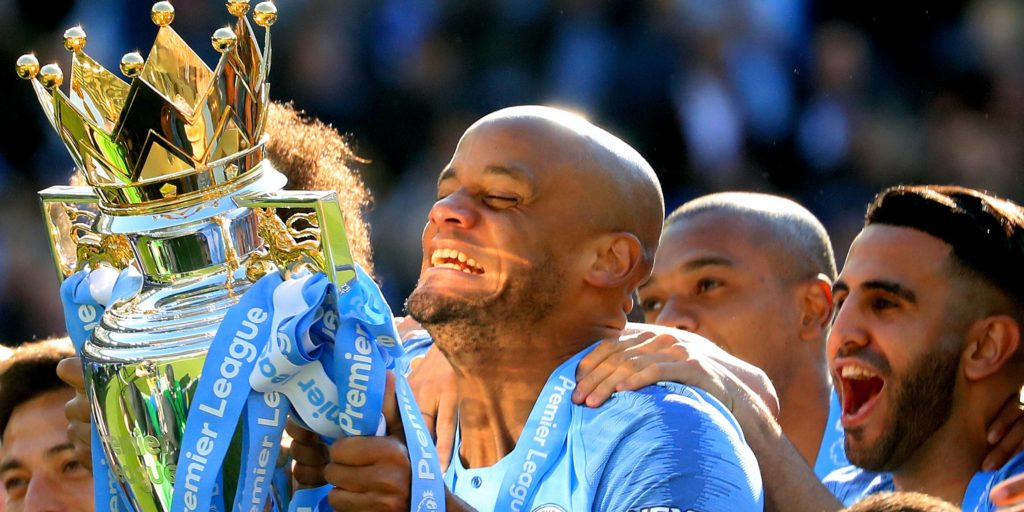 Kompany was captain for all of Manchester City’s four Premier League title wins.

A lot happened at Manchester City in the summer of 2008. But a few days before Sheikh Mansour’s takeover and the dramatic deadline-day signing of Robinho, Mark Hughes had completed a deal to bring in Vincent Kompany from Hamburg for a reported GBP 6million.

Though the Belgian had once been touted as one of the best young prospects in Europe, City fans initially wondered what they had got as they watched his sometimes awkward displays in midfield. But once Kompany was moved into defence, they would wonder no more. City had completed one of the best deals in their history.

After earning plaudits for his performances as City ended their long wait for a trophy by lifting the FA Cup in 2011, Kompany was installed as skipper by Roberto Mancini the following summer. City had to overturn an eight-point deficit in the final weeks of the season but it was the captain’s goal against Manchester United with two games to go which put them on course for the title, and at the end of that dramatic final day win over QPR, Kompany lifted the trophy to start the celebrations.

He would do it again two years later as City won the league again under Manuel Pellegrini, but in April the following year Kompany suffered the first of the muscular injuries which would mar his final few seasons with the club, severely limiting his playing time as he made only 15 appearances in all competitions in 2016-17.

But Kompany would still enjoy great moments with the club. He lifted the trophy again in 2018 as City broke several Premier League records with a dominant campaign, but he saved the best until last as, a year later, he scored a stunning long-range goal against Leicester to ensure City kept their noses narrowly ahead of Liverpool in a tense title race.

Less than two weeks later, Kompany announced he was leaving the club. He returned to his first team Anderlecht where he was named player-manager, although things have not gone his way in his first season.