Home News On This Day in 2007: West Ham opt not to appeal against record fine

On This Day in 2007: West Ham opt not to appeal against record fine 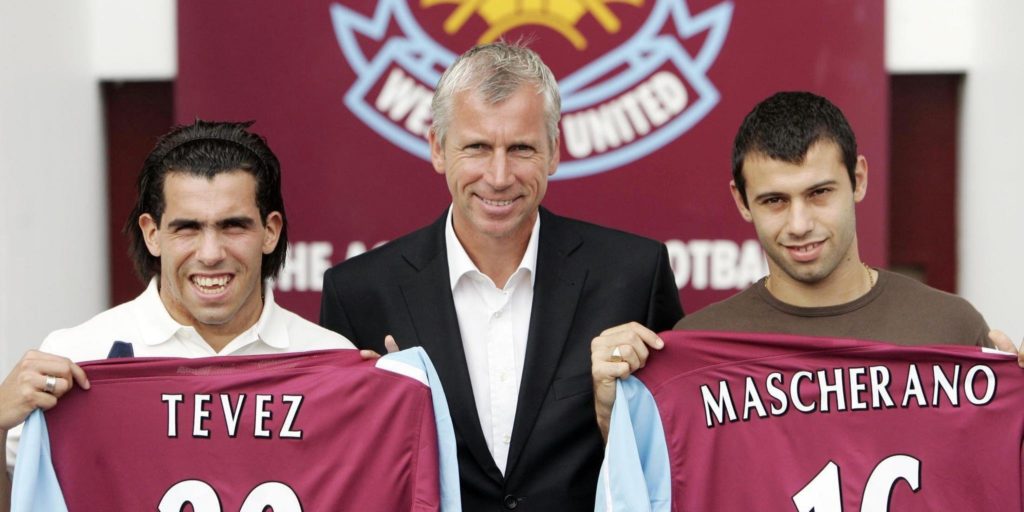 West Ham’s announcement on this day in 2007 that they would not appeal against the record GBP 5.5million fine for breaching Premier League transfer rules was hardly surprising since they evaded a points deduction and preserved their top-flight future.

West Ham had just trundled through another mid-range Premier League campaign and boss Alan Pardew gave short shrift to rumours they were on the verge of signing two of the game’s hottest young properties, Carlos Tevez and Javier Mascherano, from Brazilian club Corinthians. “Don’t be ridiculous,” laughed Pardew. “It’s never going to happen”. Little did he know what was in store for the Hammers.

West Ham announced the signing of Tevez and Mascherano in August 2006. Calling the transfer, arranged via the Media Sports Investment Group, a “massive coup” a Hammers statement added: “All other aspects of the transfers will remain confidential and undisclosed.” Tevez made his first start under new boss Alan Curbishley in January, but Mascherano barely featured, making only five appearances before he was lined up for a loan move to Liverpool.

In March 2007 the Premier League charged the Hammers with breaching transfer rules in relation to the deals. As it transpired that the players were contracted to at least four offshore companies, and facing a potential points deduction which would almost certainly doom them to relegation, the club immediately accepted the punishment of a GBP 5.5 million fine, and did not appeal against it. Tevez was allowed to continue playing, and scored the winning goal on the final day of the season at Old Trafford to keep the Hammers up.

Having effectively been relegated due to the failure to impose a points deduction, Sheffield United took action through independent arbitration, and eventually won GBP 20 million from West Ham, whose new owners took the significant financial hit. It was little solace for the Blades, who were destined to spend 12 years outside the top flight, including six in the third tier, before their eventual return.

The remainder of Tevez’s playing career was marked by ownership disputes and outrageous sums of money. He moved on to Manchester United and Manchester City – helping the latter win their first title in 44 years, before having success at Juventus. He enjoyed a lucrative spell in China before returning to his first club, Boca Juniors. After three years at Liverpool, Mascherano joined Barcelona with whom he won five LaLiga titles and two Champions Leagues. He also now plays in Argentina.