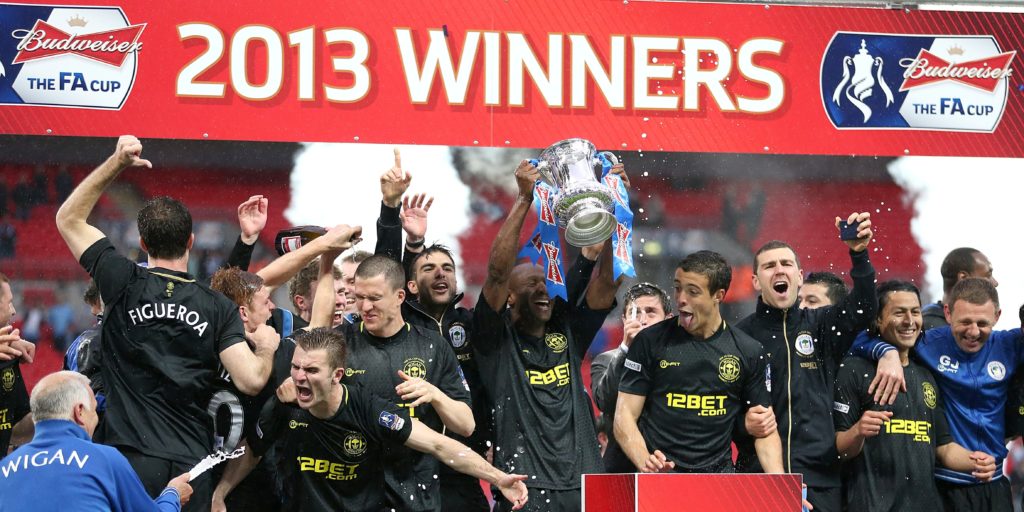 Victory was one of the tournament’s biggest shocks.

On May 11, 2013 Wigan enjoyed the most famous day in their history as they beat Manchester City 1-0 to win the FA Cup.

Here, the PA news agency takes a look back at that memorable achievement.

The biggest shock of a generation

Wigan beating Manchester City 1-0 was the biggest FA Cup final shock since Wimbledon beat Liverpool in 1988. Even though the Latics were a top-flight side – albeit staring relegation in the face – they were coming up against the reigning Premier League champions in City, a side who were full of stars. But Roberto Mancini’s men misfired and the Latics were the better side, though had struggled to find a cutting edge. But with the game was heading towards extra time Wigan forced a corner and from it Ben Watson climbed highest to head home at the near post to score one of the most famous goals in the cup’s history. City had no time to recover and Wigan were victorious.

While Wigan’s glory will always be remembered, they were hardly allowed to bask in it at the time as they still had to complete the Premier League season. And the shine was taken off their memorable Wembley win just three days later as, back in London, they suffered a 4-1 defeat at Arsenal which condemned them to relegation. In having their fate sealed, they became the first ever team to win the FA Cup and be relegated in the same season. The Latics have never re-scaled those heights and have since yo-yoed between the Championship and League One.

A tale of two Robertos

This was definitely a contrasting tale for the two managers involved, Wigan’s Roberto Martinez and City’s Roberto Mancini. Despite Wigan’s league struggles Martinez was coveted and was in demand while Mancini was feeling the pinch of expectation at City. Masterminding victory at Wembley only enhanced Martinez’s reputation and although the Latics went down, Martinez was appointed as Everton’s new manager at the end of the season. Mancini also left his role as failing to deliver a trophy was deemed a sackable offence by City’s ambitious owners.