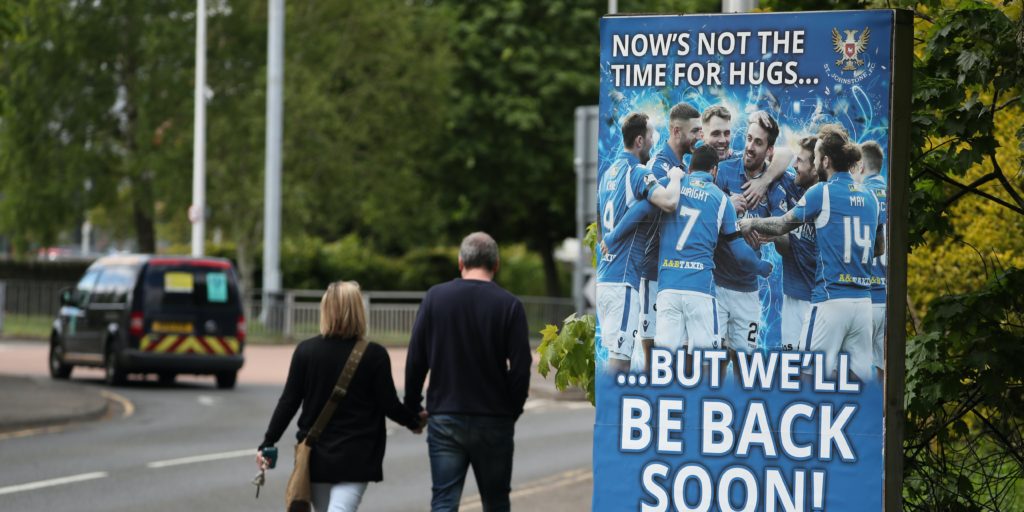 The coronavirus pandemic is set to hit clubs hard financially.

Virtual season tickets and stadiums being used as regional hubs are among the ideas being explored as Scottish football attempts to find a way back amid the coronavirus pandemic.

Using a select few stadiums for the Scottish Championship and lower league matches is one of the ideas being considered to help the game deal with the safety and financial challenges posed by the health crisis.

All football activity, including training, is suspended in Scotland until June 10 at the earliest and the Scottish Government has offered little hope of fans being allowed to attend matches any time soon.

But a Government representative, David Hamilton, has been included in five of six committees set up by the Scottish football authorities in a bid to help the game overcome some of the major obstacles.

Each group has met at least once with innovative thinking encouraged to give Government and supporters comfort about a potential return to action.

Plans to create regional hubs could allow multiple matches to be played in the one stadium during a weekend and negate the need for numerous grounds to be made safe. And with a number of surfaces being artificial, there could be savings on pitch maintenance at other grounds.

The Club and Stadium Operations group, which is co-chaired by Scottish Football Association chief executive Ian Maxwell and vice-president Mike Mulraney, is looking at pooling resources.

A statement read: “The utilisation of ‘hub’ stadiums across the country with potential to host multiple matches over a weekend, centralise match day resourcing and manage spectator safety was discussed.

“Positives and negatives were noted and it was agreed that each sub group would consider this model as part of their ongoing activity.

“The initial meeting proposed a number of areas for exploration and the chair shared planning protocols from other countries, leagues, associations and sports including Germany, Spain, Norway, Korean K-League and Swiss Rugby Union.”

With Scottish football braced for a potentially lengthy period behind closed doors, conversations have taken place over how supporters would be able to view the action.

The Broadcasting and Innovation group, chaired by Scottish Professional Football League chief executive Neil Doncaster, has explored online streaming options should games be played either fully or partially behind closed doors with the idea of “virtual season tickets” mooted.

Conversations will take place with broadcast and media partners with a new Sky TV deal set to start in August for live coverage of Premiership games.

The issue of “blocked hours” – which ensures fans in Scotland cannot watch live football at 3pm on a Saturday – was also discussed. A number of working groups will be set up to explore the ideas further.

Issues discussed in other groups include:

– Scenario planning for social distancing measures if fans are allowed in grounds.

– Issues over player contracts in respect to the furlough scheme.

– Possible amendments to the summer transfer window, which is currently June 10-September 1.

– Logistical challenges for grassroots football and welfare of players including children, and volunteers.

SFA president Rod Petrie said: “I would like to thank the sub groups for the dutiful way in which they have embraced the challenges and responsibilities placed before them in finding a viable plan to restart Scottish football.

“At this juncture I would also like to acknowledge the clear guidance and pragmatic approach from the Scottish Government which anchor our plans in reality, and are based on sound medical advice and expertise.

“Naturally, we all wish to see football return as quickly as possible but we must continue to adhere to the guidance of the Chief Medical Officer whilst using the power of football to convey messages that will keep people safe and at home.”