Home News The Bundesliga returns: A top of the table catch-up

The Bundesliga returns: A top of the table catch-up 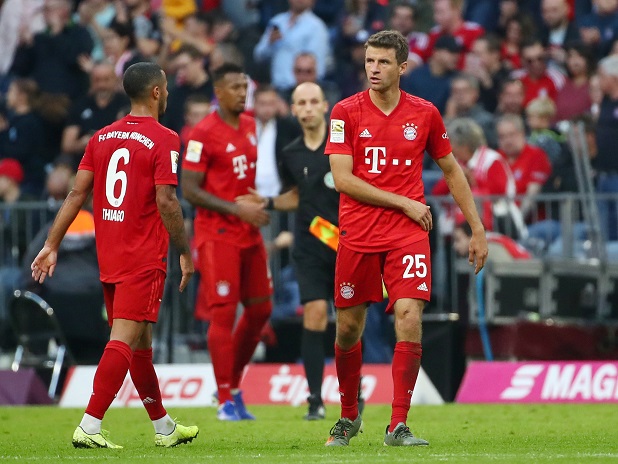 It’s a subject that has divided those in and out of the game, nevertheless, the Bundesliga 2019/20 season is resuming, beginning with fixtures this weekend.

COVID-19 has seen much of Europe’s league fixtures suspended for 2 months as governments fight the deadly virus. With with infection numbers relatively under control, Germany has elected to push on, bringing in measures to counter coronavirus if an infection has been found and giving the go-ahead for the Bundesliga to return.

Let there be no doubt, those wondering how to watch Bundesliga games will be greeted by various options, as businesses seek to capitalise on the sudden interest in the league.

Given that there’s so much to play for, not to mention a potential audience of billions this weekend alone, here’s a ‘season catch-up’.

Top of the table

Gunning for an unprecedented eighth league title in a row, Bayern Munich currently lead the pack, four points ahead of Borussia Dortmund.

Whilst the table is hardly surprising on the face of things, the fact that the Bavarian giants replaced manager Niko Kovac in November emphasises the impressive way the league’s dominant force have gone about their business of late.

New boss Hansi Flick, heavily tipped as a temporary choice previously, has claimed 12 wins in 15 league matches since his appointment. Such form has seen the former Germany assistant given a three-year contract for his troubles.

It’s all been rather unwelcome news for Bundesliga title hopefuls Borussia Dortmund and RB Lepizig.

Currently boasting one of Europe’s most exciting young strikers, Erling Haaland has given Dortmund reasons to believe that a first title since 2012 is possible.

Somehow keeping up with the pack, despite a worryingly leaky backline, the Norwegian ace heads one of Europe’s most devastating front-lines with Jadon Sancho, a continued phenomenon scoring 14 goals and 15 assists in the Bundesliga this season alone, Achraf Hakimi and Thorgan Hazard, brother of Eden.

Although, with Leroy Sane tipped to be joining an already frightening trio of Lewondowski, Gnabry and Muller, Bayern may have something to say about that – especially when the two teams meet on May 26.

Whilst the club draw the disapproving ire from much of the league’s other fans, there’s no doubt that if the side can stay together, with mounting speculation over Timo Werner and Marcel Sabitzer,  Bayern’s dominance will cease to end.

This season though, they need to overturn a five-point deficit at the top of the table if they are to stop the leaders.

Undoubtedly the match expecting the biggest global audience will be the Revierderby, between Borussia Dortmund and Schalke. Given the hit to club coffers over the last couple of months, Die Königsblauen will be hoping at least a Europa League place is in the offing, although Dortmund are expected to smell blood over their fierce rivals.

As for the opposite end of the table, Fortuna Dusseldorf welcome Paderborn, as the pair desperately fight for league survival – both teams sit in the relegation zone. Given their rock-bottom status, a Dusseldorf victory would see Paderborn more or less relegated, given the current six-point gap.