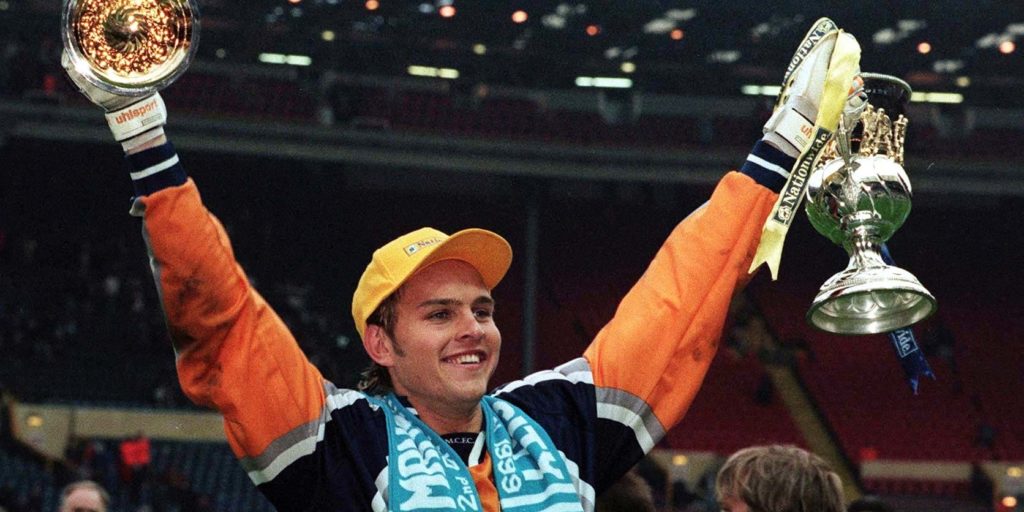 City’s 20-year-old goalkeeper only made his competitive debut at the start of the 1998-1999 season.

Manchester City heroes were made as they completed a stunning late comeback from two goals down in the Second Division play-off final against Gillingham in 1999.

Many City fans will tell you Paul Dickov’s equaliser in the fifth minute of time added on was more important to the club than Sergio Aguero’s Premier League title-winning strike against QPR – without one there would never be the other – but on the day it was only half the job.

In order to escape the third tier, City would need to beat Gillingham in a penalty shoot-out at Wembley.

Enter Nicky Weaver, City’s 20-year-old goalkeeper. Weaver made his competitive debut at the start of the season in a 3-0 win over Blackpool and went on to keep 26 clean sheets in the season, setting a new club record.

He had been relatively untroubled for much of the play-off final, with Carl Asaba ruled offside when Gillingham had the ball in the net after 38 minutes, but was then beaten twice in the last 10 minutes as Asaba and Robert Taylor put Tony Pulis’ side 2-0 up by the 87th minute.

Dickov saw his own penalty come back off both posts but City were still on top as Adrian Pennock’s wild shot flew past the target, and Terry Cooke put City 2-0 up.

Weaver was beaten by John Hodge but after Richard Edghill scored a third for City, Weaver denied Guy Butters to spark wild scenes of celebration as the young goalkeeper beckoned his team-mates before running off towards the supporters, his tongue hanging out and his arms outstretched.