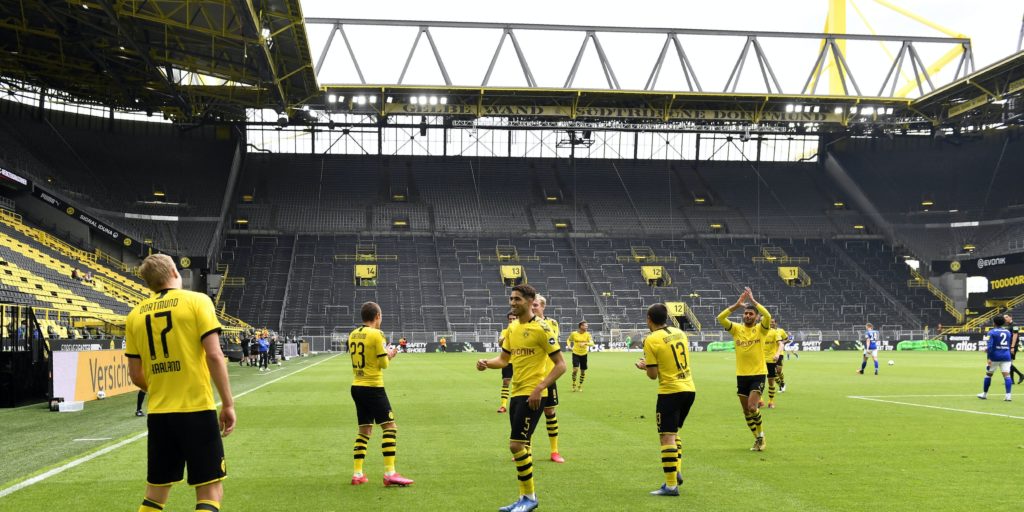 Hosts too hot for Schalke in Revierderby.

Borussia Dortmund goalkeeper Roman Burki felt they had rediscovered the joy of childhood football as they returned to action with a 4-0 derby victory over local rivals Schalke.

The eyes of the football world were on Signal Iduna Park for the most high-profile match of the Bundesliga’s return from the Covid-19 suspension but the empty stands made it a strange if not entirely new experience for Burki.

Dortmund moved a point behind leaders Bayern Munich, who play at Union Berlin on Sunday, after goals from Erling Haaland and Thorgan Hazard and a Raphael Guerreiro double.

Quoted on Dortmund’s website, Burki said: “This was no different from the game we used to play when we were children. Without spectators, just having fun. You could see that was the case for the team.”

The home side saluted the Sudtribune after the game in tribute to their absent fans and winger Julian Brandt backed up Burki’s assessment.

“I would’ve obviously preferred it if we had been playing under normal conditions,” Brandt said. “We all need to adapt. But in a situation like this, you have to try and have fun. And we did at times.

“And what better way to resume our campaign than with a win? We performed well, even if it wasn’t perfect.

“In the second half in particular, we should’ve tried to keep the level up. But we made it 3-0 relatively quickly; that played into our hands. Towards the end our energy levels dwindled. I thought it was good for the first game after such a long time. We can build on this.”

Schalke were clearly second best for the majority of the Revierderby and could have few arguments about the outcome.

It was a chastening return to action for David Wagner’s men and the former Huddersfield manager knows they need a strong response when Augsburg visit the Veltins Arena next Sunday.

“It was a poor performance and we conceded goals at bad moments – both before and just after the break,” the Schalke head coach said.

“We weren’t brave enough today. We gave Dortmund too much freedom and space. Their goals could easily have been avoided. We didn’t have a feeling of where we were at today.

“Our defending wasn’t good enough and we deserved to lose the game.

“We need to dust ourselves down and improve for next time. The team – despite the result – has a lot of potential. I don’t want to start questioning that because of one day.”