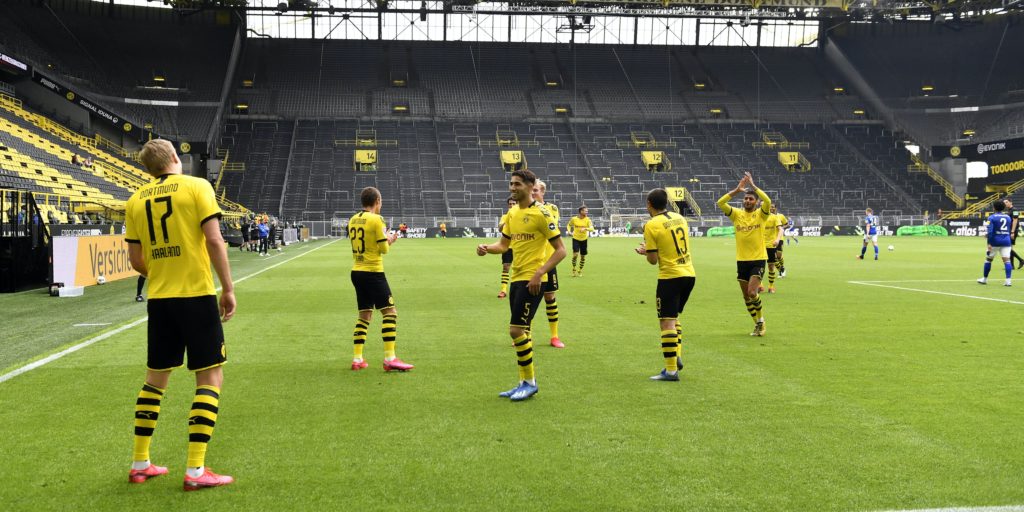 The Bundesliga returned to action behind closed doors last weekend, with the Premier League hoping for a resumption in June.

The football calendar has been harshly affected as the world looks to deal with the coronavirus pandemic.

Which events have been cancelled or postponed, and until when?

– The 2021 Nations League finals and UEFA Under-21 European Championship have been postponed.

– The women’s European Championship, scheduled to be held in England in 2021, has been pushed back to July 2022.

– In England the Premier League, Championship, League One and FA Cup remain postponed “until it is safe to resume”. The Premier League’s Project Restart is picking up pace, with clubs agreeing a protocol to return to socially distant group training. The League Two season has been concluded on a points-per-game basis following talks between clubs and the EFL. The Football Association is continuing to discuss the termination of the Women’s Super League and Women’s Championship seasons with clubs.

– Dutch Eredivisie was voided, with no champions or relegation, and has since by ratified by a judge, while Ligue 1 in France has been ended and decided by points-per-game, with Paris St Germain crowned champions.

– The Scottish Premier League has been cancelled and decided on a points-per-game basis, with Celtic claiming a ninth successive title and Hearts relegated. The Scottish Championship, League One and League Two are also cancelled but only after a delayed and confused voted.

– The Vanarama National League members, including North and South, have voted to end their seasons. While the season has been abandoned, the National League is yet to decide how it will end and determine any promotion and relegation.

– The decision to cancel the Pro League in Belgium, with Club Brugge declared champions, was ratified on Friday, April 24.

Could things still be cancelled?

In England, it is expected that League One will follow in the footsteps of League Two in being cancelled. Clubs are currently split on how to end the season, but it looks unlikely they can restart and a vote is scheduled soon.

But UEFA president Aleksander Ceferin says that he expects most of the remaining European leagues to be completed and the restart of the Bundesliga is a big step forward. The commitment to get the Premier League back is not relenting and if they can find ways to hurdle the issues of neutral venues and player safety then it is likely to be able to resume. UEFA had previously asked for leagues to consider restarting “with a different format in a manner which would still facilitate clubs to qualify on sporting merit” for the Champions League and Europa League, opening the door for play-offs to determine which clubs will play in Europe next season, but that looks unnecessary now.

The Bundesliga restarted on May 16 after a two-month break, with all games behind closed doors and following strict safety protocols. That is likely to be the blueprint for other top leagues to return. Clubs in Italy and Spain have restarted group training ahead of a proposed June resumption and the Premier League is not far behind.

FIFA has approved the extension of player contracts until seasons are able to finish, and also allowed for the summer’s transfer window dates to be moved to a period of time that is between the end of the current campaign and the start of the next one. The Premier League agreed that clubs have until June 23 to extend the deals of players out of contract on June 30.

Undoubtedly the game has changed because of the coronavirus crisis. Games will be played behind closed doors for the foreseeable future, potentially until a vaccine is found, and the safety measures around the sport will stay in place for some time. The financial implications will be huge, particularly on clubs lower down the ladder, and we are already seeing vast cost-cutting measures. Some clubs may well need intervention from the Premier League or Government if they are to survive, with no prospect of any income any time soon. This is a hugely challenging period for clubs, and the way leagues, players and teams handle it is crucial to the future of the national game.