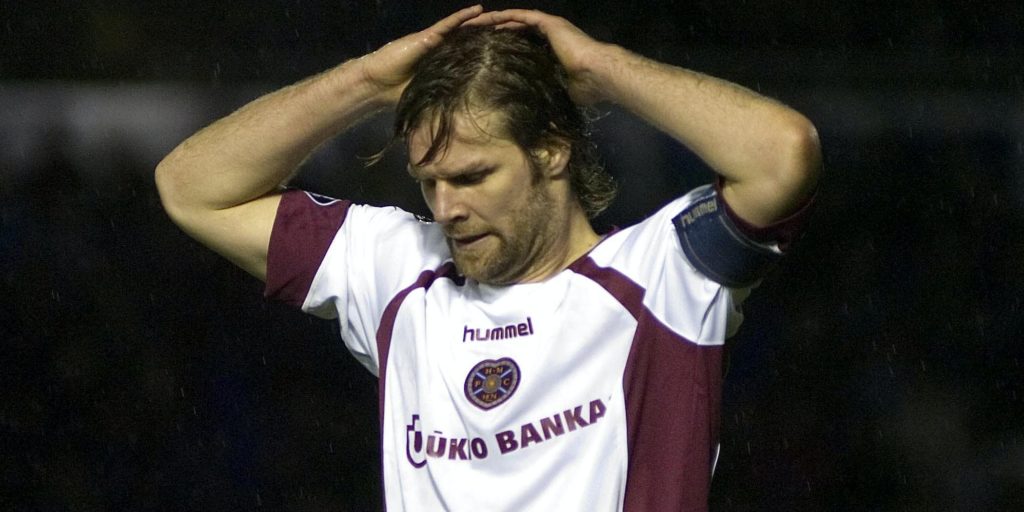 The former Hearts captain has criticised how the coronavirus pandemic has been handled by the league and clubs.

Former Hearts captain Steven Pressley has criticised a lack of compassion and leadership in Scottish football as the Edinburgh club battle to save themselves from premature relegation.

Hearts were consigned to the drop, four points adrift with eight games left, when the Scottish Professional Football League board ruled on Monday that the Premiership season could not be completed amid the coronavirus pandemic.

Partick Thistle and Stranraer are also facing relegation lower down the league with the former having been just two points adrift with one game in hand in the Championship.

Former Scotland defender Pressley told talkSPORT: “When you look at the last couple of months in society, when there have been so many acts of selflessness, that has been missing from the Scottish game. There has been only self-interest at heart.

“We are seeing front-line workers sacrificing their own lives to save people and Scottish football stinks of self-interest.

“The relegation of Hearts is absolutely extreme. The truth is our clubs, like all businesses, have suffered extremely through these difficult periods, and to almost rub salt in their wounds by relegating them is something I just can’t believe.

“If they show some leadership and governance they can actually save the situation.”

Hearts owner Ann Budge has threatened legal action if her attempts to revive league reconstruction proposals do not receive enough backing. Premiership clubs had previously appeared to scupper hopes of a solution.

“The ideal opportunity for temporary reconstruction was there,” Pressley said.

“We are faced with a little bit of a problem in Scottish football in that Sky’s contract is very dependent on four Old Firm games. So you’re in a scenario where all teams must play each other four times. The ideal solution is 10 teams but they have pushed it to 12.

“But I think for one season only that you revamp it to three leagues of 14. And, yes, that will result in the following season with three teams relegated but surely there has to be some compassion from other clubs?

“Legal action is going to be very, very difficult to get that through, especially in the timescale before the start of the season. I think it is a little bit unrealistic.

“They have one lifeboat and that’s league reconstruction. Ann has been asked to put proposals back on the table and I just hope clubs see some sense and have some compassion for the circumstances.

“That is the only way that I think Scottish football can heal any of its recent wounds.”