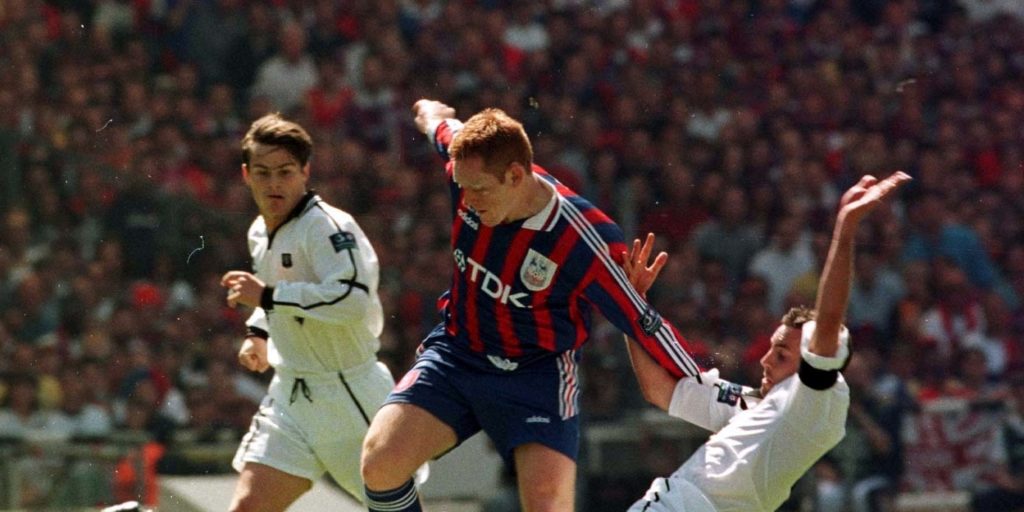 Hopkin scored a last-minute winner to send Palace back to the Premier League.

The play-offs have seen dramatic finishes but few have been as spectacular as the one conjured by David Hopkin.

With less than a minute of normal time left against Sheffield United at Wembley in 1997 the midfielder sent Crystal Palace back to the Premier League.

Hopkin had scored 16 goals in 1996-97, including one in the semi-final victory over Wolves, after the Eagles finished sixth in the league.

It was his 17th of the season, though, which is the most memorable.

At 0-0, the Eagles won a corner in stoppage time, they took it short and Simon Rodgers’ cross was headed away by Carl Tiler.

It only went as far as the edge of the area, where Hopkin collected the ball and turned. He then curled a beautiful effort into the top corner from 25 yards which left Simon Tracey in the United goal stranded.

It was redemption for Palace after they lost the play-off final to Leicester after Steve Claridge’s extra-time winner 12 months earlier.

It was Hopkin’s last action as a Palace player as he joined Leeds in July 1997, spending three years at Elland Road and also playing for Bradford before returning to Selhurst Park in 2001.

While he helped them avoid relegation that year he could not guide the Eagles to promotion in 2002 as they finished 10th.

He retired in 2003 after a time at Greenock Morton, his first club and where he currently manages, after spells in charge at Livingston and Bradford.