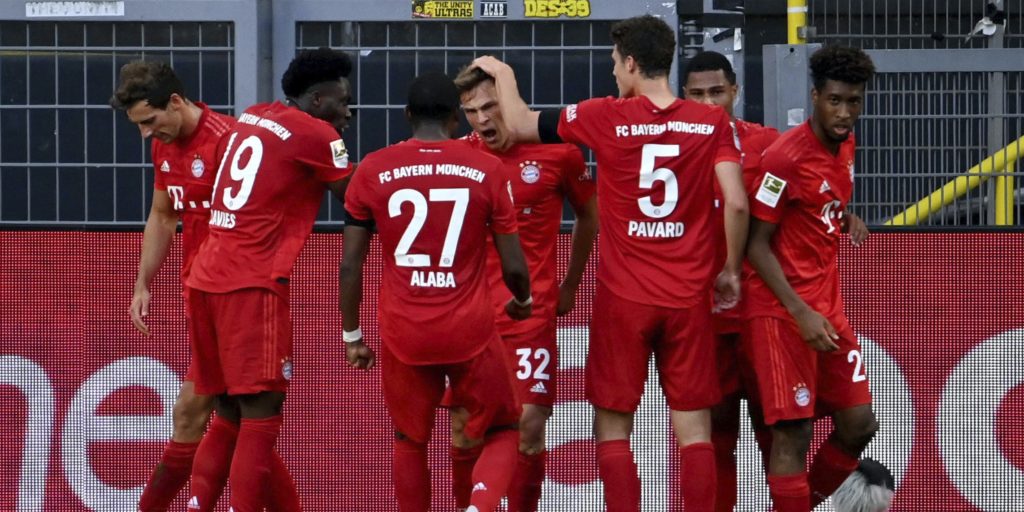 Dortmund had the chance to close the gap to one point but Bayern edged closer to an eighth successive Bundesliga title.

‘Der Klassiker’ was not only the biggest match since football resumed amid the coronavirus pandemic but the most important given the fight for supremacy in Germany.

Dortmund had the chance to move within a point of leaders Bayern on Tuesday evening, but Kimmich would open up an eye-watering seven-point gap over second as his magnificent clipped effort sealed a 1-0 win.

Defeat at an empty Signal Iduna Park was always going to be bigger for the hosts than it would have been for Hansi Flick’s visitors, who it would take a brave person to back against lifting the title at this stage of the season.

Erling Braut Haaland and Serge Gnabry had efforts cleared off the line at either end during a first half as intense as it was entertaining, with Kimmich’s moment of magic just before the break ultimately proving the difference.

The Bayern midfielder’s outrageous chip caught out Roman Burki and Lucien Favre’s impressive side failed to respond on an evening when the video assistant referee somehow failed to intervene when Haaland’s strike hit Jerome Boateng’s arm.

The teenager would limp off injured to compound matters during a second half that would see Robert Lewandowski rattle the woodwork of his former club late on.

Dortmund had flown out of the blocks on Tuesday and Boateng had to thwart Haaland on the line less than a minute in after Manuel Neuer darted off his line, while Raphael Guerreiro saw an early goal ruled out for offside.

Favre’s side were looking as sharp as ever on the break and capable of punishing Bayern down the flanks, but the visitors kept their cool and began to exert pressure.

Haaland was proving a handful but outstanding Alphonso Davies got back superbly to deny the teenager in a pulsating encounter that had seen Burki deny Kingsley Coman and Leon Goretzka.

But just as half-time approached, the Dortmund goalkeeper was left clawing helplessly when Kimmich showed impressive composure, vision and skill in sending a glorious 20-yard chip into the top left-hand corner.

Coman and Goretzka forced saves out of Burki as Bayern looked to add to that gut punch after the break, while also proving a mean last line of defence when BVB ventured forwards.

Frustration at failing to break down the visitors would turn to exasperation when the VAR did not intervene after Boateng, lying on the deck, turned Haaland’s shot away from goal with his arm.

There was more irritation for Dortmund as their precocious teenage striker limped off moments later when failing to connect with a dangerous cross from substitute Jadon Sancho.

Guerreiro fizzed a free-kick at Neuer and an offside Thorgan Hazard somehow turned an effort wide, with Mahmoud Dahoud forcing a great save as the hosts continued to seek an equaliser.

Lewandowski saw a shot hit the post via a slight Mats Hummels deflection as Bayern looked to rub salt into the wounds in the closing stages.