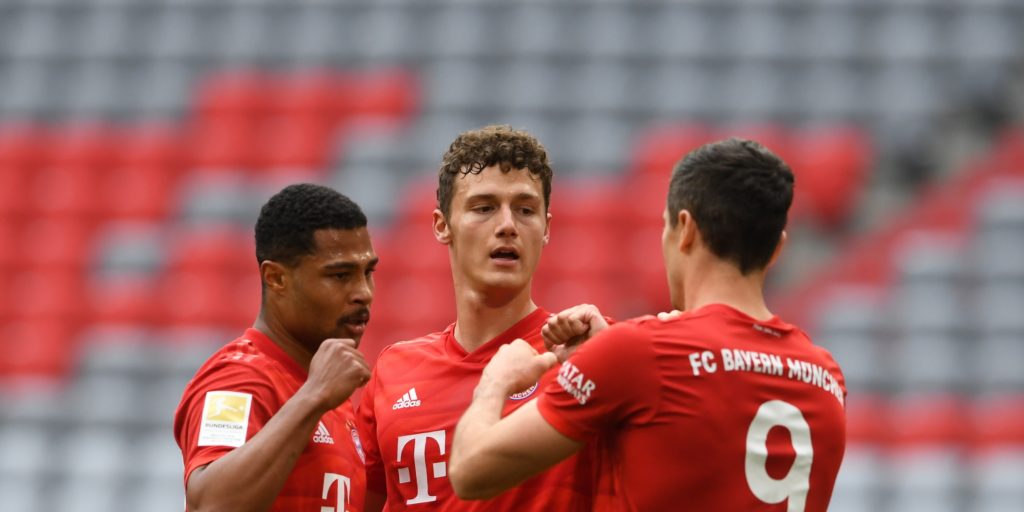 The Bavarians are now 10 points cleat at the top of the Bundesliga.

Bayern Munich eased another step closer to securing their 30th Bundesliga title, with Robert Lewandowski scoring either side of half-time in a 5-0 thrashing of Fortuna Dusseldorf.

Having seen off closest rivals Borussia Dortmund five days ago to establish clear headroom at the summit, Bayern handled 16th-placed Fortuna with ease at the Allianz Arena.

A Mathias Jorgensen own-goal and a header from Benjamin Pavard got things going before Lewandowski struck twice in seven minutes either side of the break. Alphonso Davies wrapped it up soon after as Bayern went 10 points clear at the summit.

Hans-Dieter Flick made just one change from the side which claimed a crucial win over Borussia Dortmund five days ago, bringing in Lucas Hernandez for Jerome Boateng, while the visitors rotated five of their XI.

Bayern started with their usual swagger but did give up one early chance, Alfredo Morales failing to seriously test Manuel Neuer with his attempt on goal.

Most of the action was taking place at the other end of the pitch and on the quarter-hour the opener arrived.

A Joshua Kimmich corner was only partially cleared, allowing Thomas Muller to spray a pass wide to Serge Gnabry. He produced a clean first-time cross off the instep and, when Pavard’s touch appeared to be heading wide, a double deflection off Jorgensen inadvertently finished off the move.

Bayern doubled their advantage in the 29th minute, Florian Kastenmeier getting scant reward for a fine save from Muller. The resulting corner drifted into the box, where Pavard timed his jump better than the black shirts around him and forced a header home.

Gnabry curled over after cutting inside from the wing but the third of the evening arrived just before the break. Kimmich poured into the box and, when the space looked too tight to open things up, Muller’s timely touch teed up Lewandowski for a crisp finish – his first against Fortuna.

Hernandez was replaced by Michael Cuisance at the break but everything else about Bayern was grimly familiar for the away team. With less than five minutes of the second half gone Kingsley Coman provided the spark, Gnabry had the awareness to find Lewandowski and the forward casually converted.

If Fortuna were flagging the next goal, just a few moments later, added embarrassment to the mix. Kevin Stoeger unwisely opted to walk the ball out of defence only to be swiftly robbed by Davies, who showed considerably silkier dribbling skills before finishing with a smart, low shot.

Andre Hoffman headed over from close-range as Fortuna missed out on a consolation, with Muller similarly lax from a wonderful David Alaba pass.

Dortmund can claw three points back when they face bottom club Paderborn on Sunday, but the title already appears to be sewn up.