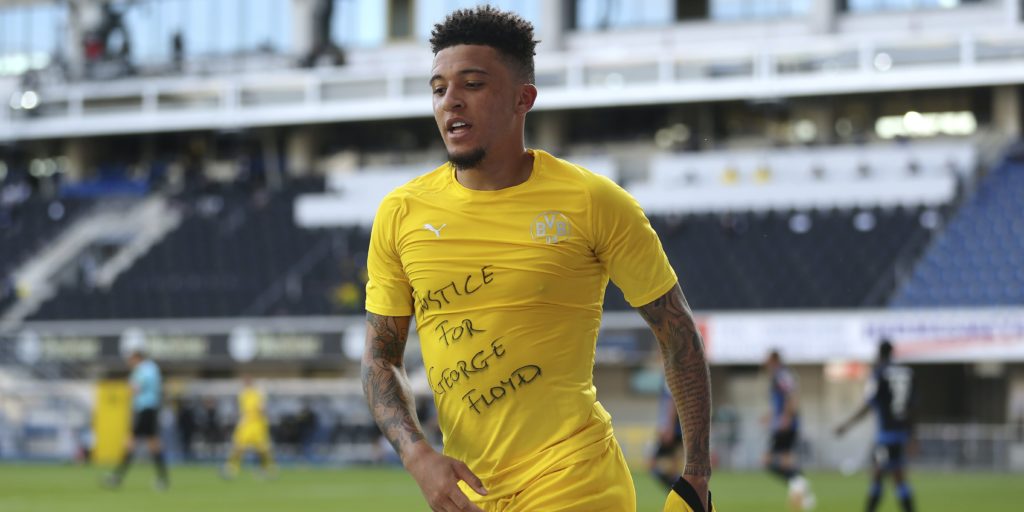 There are protests across America and further afield over the death of Mr Floyd.

Jadon Sancho revealed a ‘Justice for George Floyd’ t-shirt on the way to his first ever hat-trick as Borussia Dortmund ran amok at Paderborn.

There are protests across America and further afield over the death of Mr Floyd after a white police officer held him down by pressing a knee into his neck last Monday in Minneapolis.

Borussia Monchengladbach’s Marcus Thuram took a knee in tribute to the Black Lives Matter movement after scoring in Sunday’s win against Union Berlin, with Sancho making a statement of his own later in the day.

‘Justice for George Floyd’ was scrawled on the t-shirt revealed by the England international after he tapped home his first again Paderborn, with the 20-year-old going onto score a further two in a 6-1 hammering.

The former Manchester City man was handed his first start since the Bundesliga’s resumption on Sunday, but Dortmund struggled in the first half without the injured Erling Haaland.

Thorgan Hazard would go on to kick-off a second-half goal frenzy, with Sancho adding a quickfire second before former Brighton defender Uwe Hunemeier pulled one back from the spot.

Hopes of a comeback were short-lived as Sancho scored a superb second, before rounding off victory following goals from Achraf Hakimi – who would also display a ‘Justice for George Floyd’ message – and Marcel Schmelzer.

It was an impressive response to the disappointment of Tuesday’s 1-0 home loss to leaders Bayern Munich, but Paderborn ensured they did not have it their own way in the early stages.

Christopher Antwi-Adjei looked lively and Gerrit Holtmann impressed for the Bundesliga’s bottom-placed side, with Dortmund patiently waiting for an opening.

Hazard forced Paderborn goalkeeper Leopold Zingerle into a save at his near post after being superbly found by Lukasz Piszczek in the 17th minute, with Jamilu Collins impressively blocking a Raphael Guerreiro shot soon after.

Hazard threatened again when forcing a mix-up between skipper Christian Strohdiek and Zingerle, but Paderborn regained their composure and retained a compact defence.

Emre Can headed wide and Julian Brandt fluffed his lines before half-time – a period that Dortmund returned from with renewed energy.

Zingerle did superbly to stop Hakimi shot and Hazard wasted a glorious chance, only to make amends when Paderborn goalkeeper’s pushed a shot into his path in the 54th minute.

The England international ripped off his shirt to reveal a message expressing his anger at events in the USA, leading to him being handed a yellow card.

Ex-Norwich forward Dennis Srbeny saw an attempt to reduce the deficit ruled out for offside, before Can gifted Paderborn a chance from the spot moments after being superbly denied at the other end.

The former Liverpool midfielder was adjudged to have handled Mohamed Drager’s attempt and Hunemeier fired into the top left-hand corner in the 72nd minute.

But Paderborn would be nursing a two-goal deficit again within two minutes as Sancho opened his body and thumped a fine left-footed shot into the far corner.

Dortmund were in cruise control and would rack up six before full-time. Hakimi made his own political message after scoring in the 84th minute, with sub Schmelzer directing home at the near post after fellow substitute Gio Reyna saw an effort tipped around the post.

Sancho would complete the rout when bursting through at the death and firing home at the near post when he could have passed it to Hazard.