Marcus Thuram takes a knee after scoring in Bundesliga clash 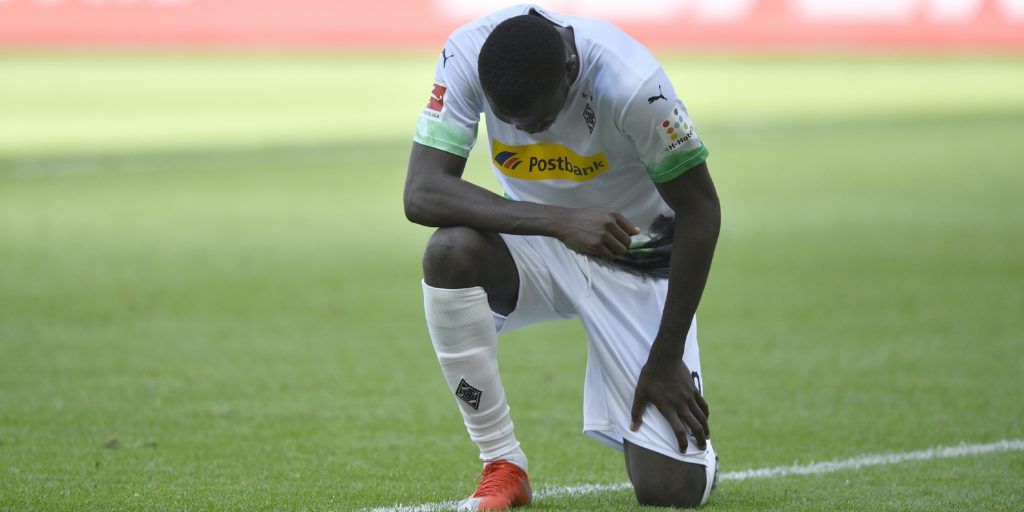 Marcus Thuram took a knee in tribute to the Black Lives Matter movement after scoring for Borussia Monchengladbach in the Bundesliga.

The French striker dropped to his left knee and bowed his head after making it 2-0 just before half-time.

The tribute came amid protests in America over the death of George Floyd.

Thuram, son of World Cup winner Lilian, scored a second as the hosts went on to beat Union Berlin 4-1 and move back into the Bundesliga’s top three.

Florian Neuhaus fired Borussia ahead after 17 minutes. Sebastian Andersson pulled one back but Thuram and Alassane Plea added further second-half goals for the hosts.

They are now third, 11 points behind leaders Bayern Munich while Union Berlin dropped to 14th and remain in relegation trouble.

Neuhaus had already gone close with a spectacular lob and he opened the scoring after 17 minutes when he collected the ball on the edge of the box, held off two challenges and fired in off the post.

The hosts doubled their lead just before half time when a slick move sliced through Berlin, Plea cut inside and spotted Thuram peeling off his marker for the Frenchman to nod in from six yards.

But Berlin pulled a goal back five minutes after the break when Andersson netted his 12th of the season from close range.

Plea and Thuram combined again to make it 3-1 soon after and it was 4-1 with nine minutes left when Plea coolly steered in from 12 yards.