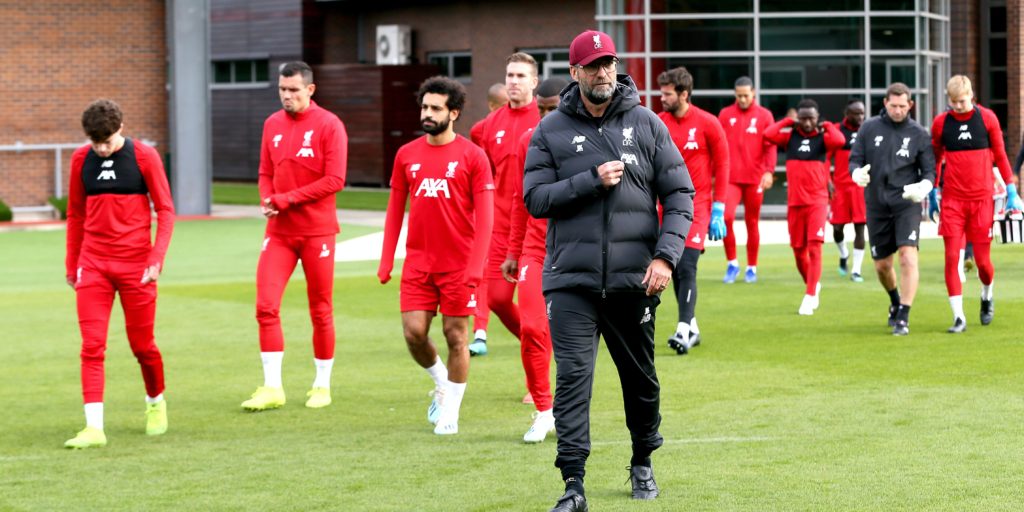 The Reds are 25 points clear at the top of the table.

Liverpool boss Jurgen Klopp says having the whole group back together is a “massive, massive lift” as the Reds prepare to wrap up a first league title in 30 years.

English football has been on hold since mid-March due to the coronavirus pandemic but ‘Project Restart’ is well under way and the Premier League is set resume on June 17.

Assuming the restart goes ahead, it will be a matter of when rather than if Liverpool win the Premier League given Klopp’s men boast a 25-point lead over nearest rivals Manchester City.

The Reds stepped up their preparations by resuming contact training in recent days, with Klopp looking to hit the ground running in the postponed Merseyside derby.

“We don’t have to be match-fit now,” he told Liverpoolfc.com.

“We try it with increasing intensity, day by day, but we have to be fit on the 19th or 20th, whichever day they will give us against Everton, I think. That’s the moment when we want to be at 100 per cent.

“It’s round about three weeks until then, that’s good. We want to use that and we will.

“It’s our pre-season; how I said, we don’t expect a long break in between the seasons, so this is a very important period for us.

“We never had nine weeks without football training in our lives – since we played football, pretty much. That’s all different but interesting as well.

“We enjoy the situation, that’s really all good. And it makes all the difference for us, to be honest, to come together and have this hour or two here together.

“You get this contact, feedback as well on the pitch directly, not via a computer or a screen. It’s a massive, massive lift.”

Klopp says having the squad together again has been “absolutely brilliant”, allowing them to step up tactical work as the resumption edges closer amid a much-changed backdrop.

Social distancing and rigorous hygiene regimes will remain in place when action resumes next month, with Liverpool now awaiting confirmation on schedules and venues.

“That’s what we were all waiting for,” Klopp said. “But now it’s always like this. You were waiting for that, somebody tells us we could start, that’s good.

“Now we know, from a training point of view, what we have to do when and when we have to be at 100 per cent in the best way, how we can train in different intensities. That was very important.

“Now, of course, it’s more and more interesting when we play where, the times are really important because we will see how we can organise the travel stuff. So, the situation keeps us busy, that’s absolutely OK.

“But on the pitch everything is fine, that’s really great. Around, we organise it as good as possible and use the situation.”