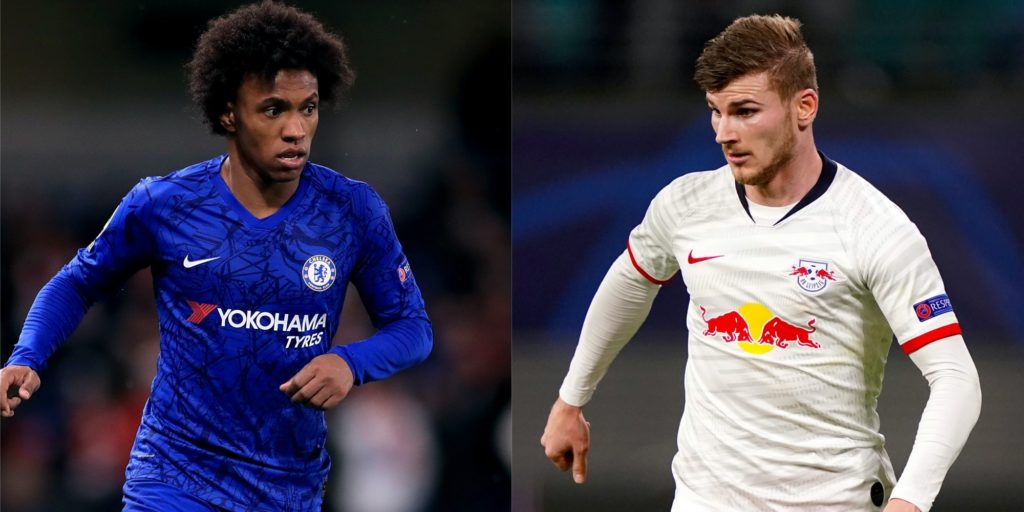 Chelsea are interested in Timo Werner, according to the latest football gossip.

Chelsea are the latest club considering making a play for RB Leipzig striker Timo Werner, ESPN reports. Liverpool’s interest in the 24-year-old has been widely reported, but the Blues are now said to be considering a bid. Chelsea have also reportedly expressed interest in Lyon’s Moussa Dembele as a forward target, but the French club’s asking price might be too high, which has sharpened the Blues’ focus on Werner.

Willian still needs to find a new home, after Real Madrid rejected the chance to sign the Chelsea forward, the Daily Mirror says. The Brazilian will be a free agent this summer and is said to be ready to leave Stamford Bridge. Real Madrid were believed to be in the running to sign him but manager Zinedine Zidane has indicated he is reluctant to sanction a move for the 31-year-old. Arsenal and Tottenham are reported to be on Willian’s wish list.

Arsenal are willing to keep David Luiz, but are likely to offer him reduced wages, the Daily Mirror reports. The Brazilian joined the Gunners last season on a one-year deal with a 12-month extension option, worth a reported GBP 130,000 a week. Arsenal are keen to keep the 33-year-old but would offer reduced terms due to the effect of the coronavirus on football finances.

Liverpool pair Harry Wilson and Rhian Brewster are set to have their loan spells away from the club extended, The Daily Telegraph reports. Wilson, 23, is at Bournemouth, while Brewster, 20, is on loan at Swansea. Both loan deals run until the end of the current season, but the Reds are looking to lengthen both terms.

Lionel Messi will not be leaving Barcelona this summer after his contract release clause expires, according to the Evening Standard. Messi had an agreement in his contract allowing him for leave on a free transfer at the end of the current season, but had to let the club know before the end of May. With the deadline having expired, the 32-year-old will have at least one more season at the Nou Camp.

Wilfried Zaha: The Crystal Palace star has been linked to a lucrative move to Newcastle after the club’s proposed Saudi takeover, the Daily Mirror reports.

Philippe Coutinho: The 27-year-old has been linked to a sensational move to Leicester, where he would be reunited with his former Liverpool boss Brendan Rodgers, according to the Daily Mirror.