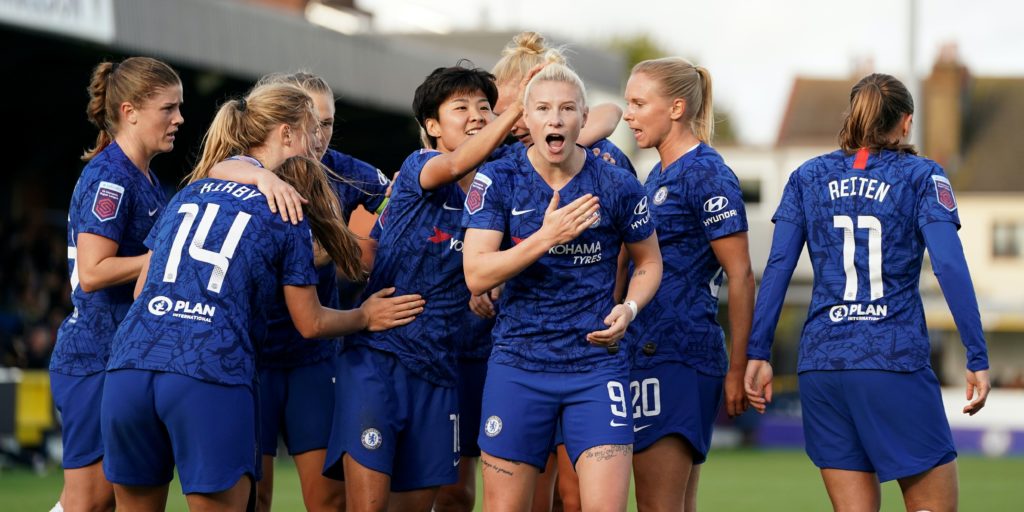 The London club had been a point behind Manchester City but with a game in hand when the season was suspended.

Chelsea have been confirmed as 2019-20 Barclays FA Women’s Super League champions after the season was ended last month.

The Football Association board reached the majority decision to decide the season on a basic points-per-game system after the coronavirus pandemic saw the top division and Championship brought to an early halt.

Chelsea have been awarded the Women’s Super League title as a result, with Manchester City finishing second and joining Emma Hayes’ side in qualifying for next season’s Women’s Champions League.

Liverpool have been relegated to the Championship and will be replaced by Aston Villa, who were awarded the second tier title on PPG.

In a statement, the FA said: “All decisions were made and finalised by the FA board – and were based on the most appropriate sporting outcome for the 2019-20 season.

“The FA board considered and analysed all of the recommendations made to them by the FA Women’s Super League and FA Women’s Championship board, which were collated after a full and thorough consultation process with the clubs.”

Kelly Simmons, FA director of the women’s professional game, said: “Firstly, I would like to thank the clubs for their ongoing collaboration and support throughout this period.

“They have played a crucial role in helping to shape the decision-making process, with the welfare of the players and clubs first and foremost.

“I would also like to congratulate the players, coaches and staff of Chelsea and Aston Villa. Although the 2019-20 season has been prematurely curtailed, it has been a hard-fought campaign and their success is well deserved, with the outcome based on sporting merit.

“Women’s football has made huge strides in recent years, and the FA has been at the forefront of investment and support to help grow women’s football at every level of the game.

“Our commitment to the women’s game is unwavering and we will continue to work closely with the clubs to ensure we come back even stronger for the 2020-21 campaign.”

Liverpool made their frustration known at being relegated to the Championship in such circumstances.

“Liverpool FC is disappointed by today’s decision on how the 2019-20 Women’s Super League season has been concluded, which will see the Reds relegated to the Championship,” the club said in a statement.

“The Covid-19 pandemic has presented huge, ongoing challenges around the world, the majority far more important than football.

“The focus of our women’s team and staff since the beginning of the crisis was to be ready to return to WSL play when it was safe and proper to do so.

“We believe we would have been able to meet all operational requirements but a return to play was deemed impractical. As proud founder members of the WSL, our fans greatly value our position within the league and we hoped for the opportunity to secure our status on the pitch.

“We enjoyed several notable firsts as a women’s team this season – including a first WSL game at Anfield – and we are committed to continuing to grow the women’s game in this country with our fellow teams. We wish all the WSL teams well and look forward to seeing them again soon.”

There will be no promotion or relegation between the Championship and third tier this season as the 2019-20 results were expunged between tier three and seven of the women’s pyramid due to the impact of Covid-19.

The resolution of this season’s Women’s FA Cup remains under review and will be discussed by the FA women’s board later this month with the competition at the quarter-final stage.

The FA is also working with clubs and stakeholders “to plan for next season and we aim to announce the target start dates for the 2020-21 campaign soon”.