Barcelona can call on Lionel Messi and Luis Suarez against Mallorca 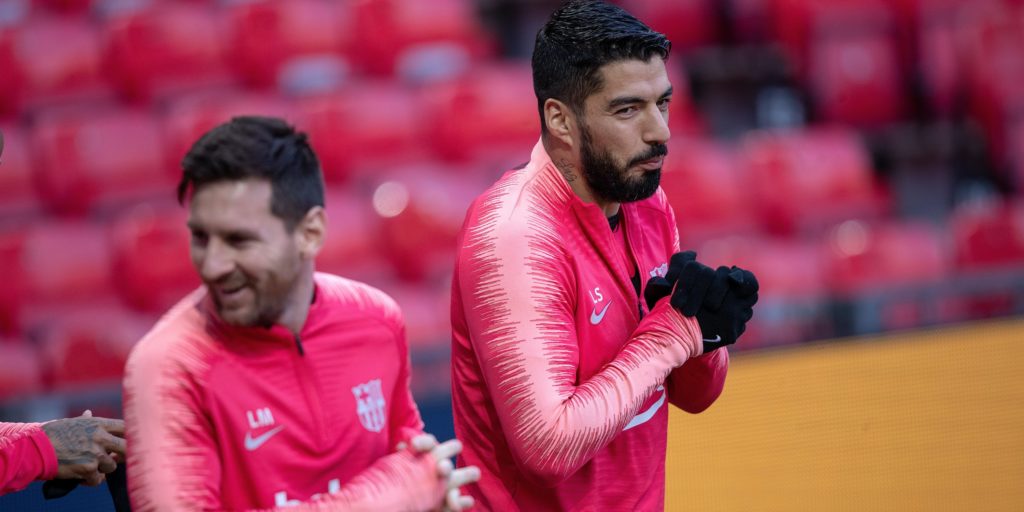 Pair prepare to pose a threat against relegation-threatened hosts.

Lionel Messi and Luis Suarez will be available for selection when Barcelona return to LaLiga action at Mallorca on Saturday night.

Messi has returned to full training after missing a few sessions last week with a thigh issue as the league leaders ready themselves for their first game in three months.

Suarez, meanwhile, thought his season had been ended when he underwent surgery on his right knee in January, but Barca head coach Quique Setien confirmed he would have the Uruguayan and Messi at his disposal.

He said at a press conference: “Fortunately Messi, these kinds of players that have been playing for so many years, they know how to control their fatigue.

“I’m sure if there’s some risk, Messi will be the first to say that he needs to rest.

“Every day (Suarez) is in better shape and after five months it’s going to be great for him to play some minutes and try to find the best Suarez.”

LaLiga became the second major European league to resume behind closed doors on Thursday evening amid the coronavirus pandemic, after the Bundesliga restarted last month.

Setien admitted to some trepidation as he added: “All the managers are worried because we don’t know exactly how everything will go in this first game.

“We can expect it but we don’t know how we will answer to this new situation. – if Barcelona will be the Barcelona that we saw before the break, or if we will see a new Barcelona.

“Also, we don’t know if we will face a different or the same Mallorca.”

Barca can extend their advantage atop the standings to five points on a day where rock-bottom Espanyol will play Alaves, Celta Vigo welcome Villarreal and struggling Leganes play host to Real Valladolid.

Second-placed Real Madrid return to the Bernabeu on Sunday as they host Eibar, Atletico Madrid travel to Athletic Bilbao and Osasuna go to Real Sociedad.

In the Bundesliga, Bayern Munich could move closer to an eighth successive top-flight title with victory against Borussia Monchengladbach at teatime on Saturday.

The Bavarian giants are seven points ahead of second-placed Borussia Dortmund, who go to Fortuna Dusseldorf earlier on Saturday, with four games left.

However, they will be without midfielder Thiago, who has undergone groin surgery, while strike pair Thomas Müller and Robert Lewandowski are suspended after collecting their fifth yellow cards in last week’s win over Bayer Leverkusen.

While they have won their last 12 competitive fixtures, reaching the DFB Cup final after downing Eintracht Frankfurt in midweek, Bayern boss Hansi Flick knows the past few weeks have taken their toll.

He said: “We’re focused on ourselves, we want to win our matches. Of course the last few weeks have been exhausting. But we’ve managed it so that those who’ll play can turn in a top performance.”

Gladbach were the last side to defeat Bayern in the reverse fixture six months ago, and Flick added: “They’ve assembled a good team, they play attractive football and are enjoying a very successful season.”

On Sunday, Mainz go up against Augsburg and Bayer Leverkusen go to Schalke.