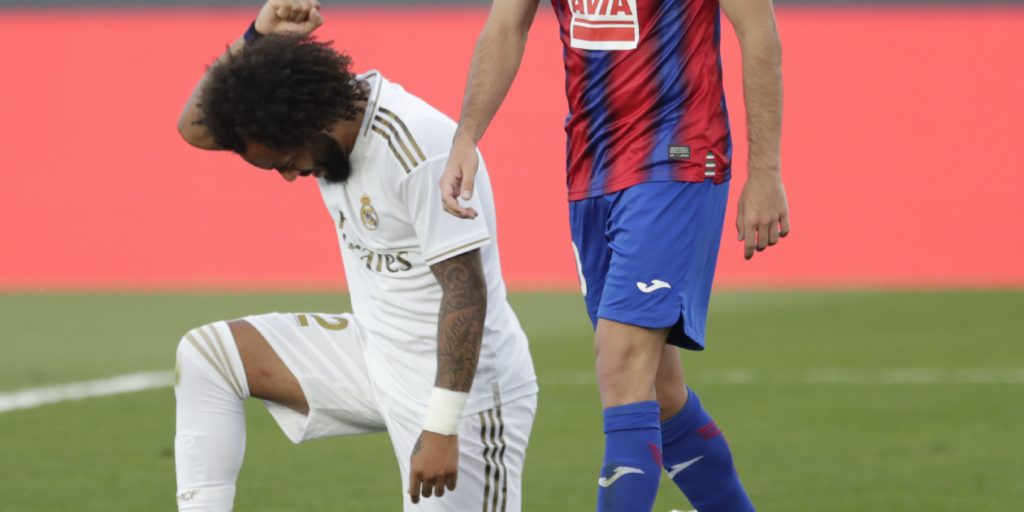 Real Madrid moved to within two points of LaLiga leaders Barcelona after marking their return to action with a routine 3-1 win over Eibar.

Toni Kroos, Sergio Ramos and Marcelo scored in the first half as Zinedine Zidane’s side made light work of their first game for three months on Sunday.

Pedro Bigas made it 3-1 after the break with Eibar remaining two points above the relegation zone.

Real responded to Barca’s 4-0 win at Mallorca on Saturday to keep the heat on their title rivals.

Madrid are playing at their training base, the Estadio Alfredo Di Stefano, after renovation work at the Bernabeu was stepped up during lockdown.

Kroos opened the scoring after four minutes when his first-time finish from 18 yards found the top corner following good work from Karim Benzema.

It was 2-0 after 30 minutes when Ramos started and finished a quick break, marauding forward before tapping in after an unselfish lay-off by Eden Hazard.

Seven minutes later Marcelo made the game safe when he drilled in from just inside the box after Hazard’s shot had been saved. The defender then took a knee to celebrate in solidarity with the Black Lives Matter movement.

Thibaut Courtois denied Sergio Enrich but the visitors pulled a goal back on the hour when Bigas’ deflected effort found a way in.

Wales international Gareth Bale was a second-half substitute while Hazard came off and had an ice pack put on the ankle he injured in February.