Home News What is in store as the Premier League resumes?

What is in store as the Premier League resumes? 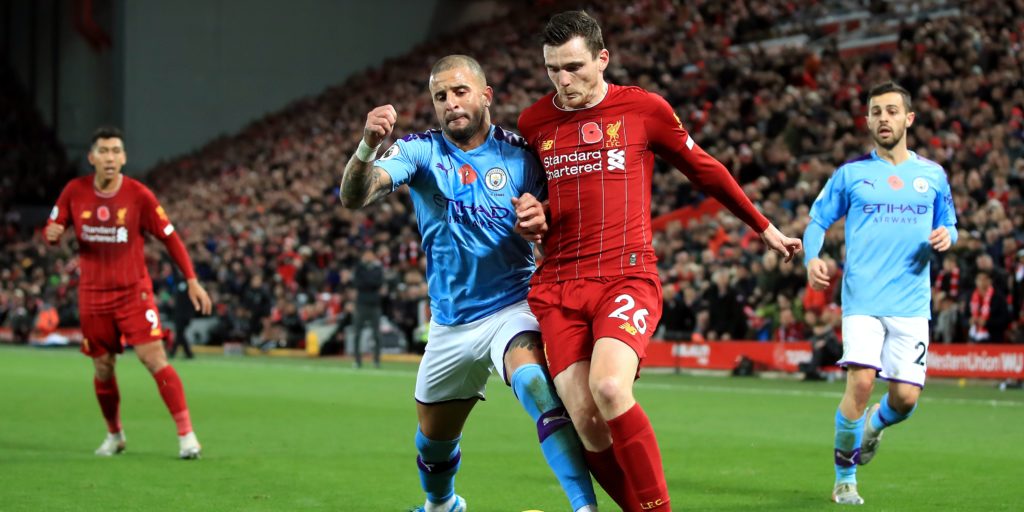 Liverpool have been robbed of winning a first title in 30 years in front of a crowd.

The Premier League finally returns this week after the coronavirus pandemic caused a three-month shutdown.

Here, the PA news agency takes a look at each of the club’s state of play upon the resumption.

The Reds have been robbed of winning a first title in 30 years in front of a crowd but at least now they will be able to complete the job on the pitch. Despite something of a wobble before the break, Jurgen Klopp’s men could claim glory in their first game back before aiming to finish with a record points total.

City will be dethroned as champions but they are the best bet to finish second, despite some patchy form before coronavirus struck. Leroy Sane will be back in the fold after recovering fully from a knee injury but their mood may well be impacted by the ruling of the CAS appeal on their European ban. They are still in the FA Cup and will have a Champions League campaign to finish when the domestic scene is settled.

Another crack at Champions League football is within touching distance for Leicester, who will not have been too disappointed with a break. Their form in 2020 was disappointing, but a reset should give them the opportunity to nail down a top-four spot, while they are still challenging for the FA Cup. Their final three games against Sheffield United, Tottenham and Manchester United will decide their fate.

Frank Lampard was on course to deliver a top-four finish in his first season of Premier League management at Chelsea, despite their inconsistent form. The chance for Lampard to work with his young players for an extended period can only help them finish the job when the season resumes. Games against Manchester City, Liverpool, Sheffield United and Wolves will be decisive, while they are also in the FA Cup and have the formality of a Champions League second leg tie against Bayern Munich, having lost the first 3-0.

United would have been disappointed the season ground to a halt as they were in fine form, on an unbeaten run in all competitions going back to January and looking like they were going to make a Champions League spot their own. They will have to try to rediscover that momentum, but will be boosted by the return of injured duo Marcus Rashford and Paul Pogba. Blockbusting opening clashes with Tottenham and Sheffield United are followed mainly by games against teams in the bottom half, so they have to be fancied for the top four.

Wolves were having their best season in recent memory and were firm contenders for the top four and Europa League when the shutdown came. They had been playing to a gruelling schedule due to their European exertions so the rest will have benefited them hugely, along with the league finishing before European ties resume. Adama Traore will be fully fit after shoulder problems, so Wolves will be good to go.

The Blades were another team who could have done without a break as they were flying and challenging for the European places. Along with an aggressive style of play, they were being carried by the momentum of back-to-back promotions, so it is fascinating to see whether a hiatus will affect that. They are viewing it as a nine-game shootout for a place in Europe and with games against Manchester United, Tottenham, Wolves, Chelsea and Leicester it is in their own hands.

Arguably no team has benefited more from a three-month break than Tottenham, whose boss Jose Mourinho was repeatedly saying he wished he could fast-forward to July 1 before the suspension. It has allowed Harry Kane, Son Heung-min, Steven Bergwijn, Erik Lamela and Moussa Sissoko to regain their fitness while Mourinho has also had the opportunity of a pre-season. They have it all to do in the race for the Champions League, but at least now they are at full strength with games to come against teams around them.

It was Mikel Arteta’s contraction of coronavirus that brought the season to a halt back in March and it came at a time when Arsenal were on a roll under the Spaniard. They had hauled themselves back into European contention so, like United, must regain that momentum. Their game in hand – which is vital to how the season would pan out if it were later to be decided on points-per-game – is away at Manchester City on the first day back but their quest will surely be decided by a four-game run against Wolves, Tottenham, Leicester and Liverpool.

Burnley the were on a four-game unbeaten run when the season halted that put them four points off Sheffield United in seventh and with an outside chance of reaching the European places. It seems that the hiatus will not necessarily work in their favour, but with the majority of their games against teams in the bottom half and playing with freedom they will be eyeing a late dash.

If Burnley are outsiders for the top seven, then so are Crystal Palace as they are on the same points thanks to a run of three wins prior to the shutdown. Previously they were looking over their shoulders at the bottom three, so it seems impossible to think the south-east London side will have the consistency to be able to overhaul so many teams. But with games against Wolves, Chelsea, Leicester, Manchester United and Tottenham they could have a big say in how the season ends.

Three games without a win curtailed a good run of form for Everton when the virus came, so their mid-table position means they are one of the few teams with not a lot to play for in the remainder of the campaign. Carlo Ancelotti will use the time to make further judgement on his squad as he looks to build a team that will challenge much higher up the table next season.

Newcastle will feel they need a few more points to be absolutely sure of avoiding the drop and boss Steve Bruce will see it as a nine-game audition to impress the club’s prospective new owners. Bruce will lose his job in the summer to a high-profile manager if reports are true, so he will be looking at this period as a chance to save himself.

Sitting seven points above the bottom three means Southampton are looking over their shoulder. The break came at a good time for the south coast side, having lost four out of five, and it has been a positive period away with boss Ralph Hassenhuttl signing a new contract. They have games against teams below them in the table so should be able to make themselves safe.

Brighton will be under pressure to perform once the season resumes having fought so vocally against neutral venues. Without a win in 2020, they are just two points above the drop zone and remaining games at the Amex Stadium against Arsenal, Manchester United, Manchester City, Liverpool and Newcastle will surely make them outsiders to stay up.

Out of the relegation zone only on goal difference, it is little surprise that West Ham vice-chairman Karren Brady led the early calls to null and void the season. The break could help the Hammers considering their miserable run of form prior to it, although games against Wolves Tottenham and Chelsea in their first three back make grim reading. Their fate might be decided in the final four games, where they play Norwich, Watford and Aston Villa.

Watford were also vocal critics of the neutral venue proposal as they are also out of the bottom three by virtue of goal difference. A 3-0 walloping of Liverpool aside, their bounce under Nigel Pearson was beginning to wane and they are in deep trouble. But favourable home games against Southampton, Norwich and Newcastle fuelled the protests and they are likely to have to win all three of those if they are to stay up as they end the season with games against Manchester City and Arsenal.

Bournemouth were depleted by injuries when the season halted and, sitting in the relegation zone, were staring the Championship in the face. But the likes of David Brooks and Josh King are back in the fold and will be vital to the Cherries’ hopes of staying up. They still have a lot of the big guns to play – including both Manchester clubs and Tottenham – so it is not going to be easy to maintain their Premier League status.

Never has a game in hand caused as much debate as Aston Villa’s, which seemed crucial to any talk of PPG finishes. They currently sit in the bottom three, but if they win their extra match against Sheffield United – which kicks-off the resumption – then they will be out of it. They have the influential John McGinn back from injury but a tricky looking fixture list means it is an uphill battle to stay up. They will be hoping to take it to the last day when they face West Ham.

Boss Daniel Farke was saying it would be a miracle to stay up as early as Christmas and six points from safety they are clear favourites to be relegated. But bigger deficits have been overturned in the past and the hiatus will have presented a good opportunity to hit the reset button and have a real go when the resumption comes. Home games against Southampton – their first back – Everton, Brighton, West Ham and Burnley are going to be key.