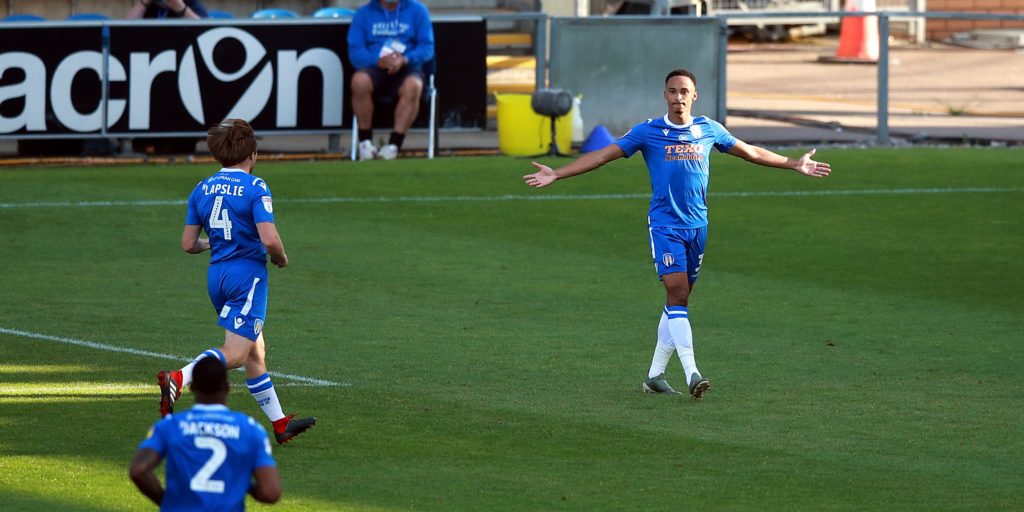 Bramall curled in a set- piece with nine minutes remaining.

Bramall curled in a set-piece with nine minutes remaining which Exeter goalkeeper Lewis Ward could only parry into the net at his near post, giving the U’s the edge ahead of the second leg at St James Park.

With the match played behind closed doors at a near-empty JobServe Community Stadium, it was a surreal atmosphere that greeted the players.

And with so much at stake for both sides, it was no surprise perhaps that the encounter got off to a cagey start, with little in the way of attacking threat for either team in the opening stages.

It had been more than three months since either side had played a competitive match and it showed a little early on.

But it was a tightly-contested affair and it took until just before the midway point in the first half for either side to register a first effort on target.

Bramall’s curled free-kick was palmed over the crossbar by Ward, after striker Luke Norris had been clattered 25 yards from goal.

And at the other end, Colchester midfielder Ben Stevenson did well to stop Nicky Law’s on-target effort in the area from close range soon after.

Exeter were forced into a change seven minutes before the break when Matt Jay was sent on for the injured Lee Martin.

But it was the Grecians who finished the first half the brighter and looked the more likely to break the deadlock.

The second half started in similarly cautious fashion.

Yet Colchester did come close to breaking the deadlock just before the hour mark when Courtney Senior’s powerful effort from the edge of the area flashed just wide of the near post.

The game began to open up a little after that and Exeter almost took the lead on the hour mark through substitute Jay, whose free-kick flew into the side-netting after he had been fouled by Harry Pell just outside the box.

Both sides made changes at the midway point of the second half, with Malta international Luke Gambin sent on for Senior for Colchester and Archie Collins replacing the tiring Law for the Grecians.

With 15 minutes remaining, Frank Nouble’s powerful shot forced Ward to make a save at his near post after a swift Colchester break.

And the U’s made the crucial breakthrough through defender Bramall late on, to gain the edge ahead of the second leg in Devon.