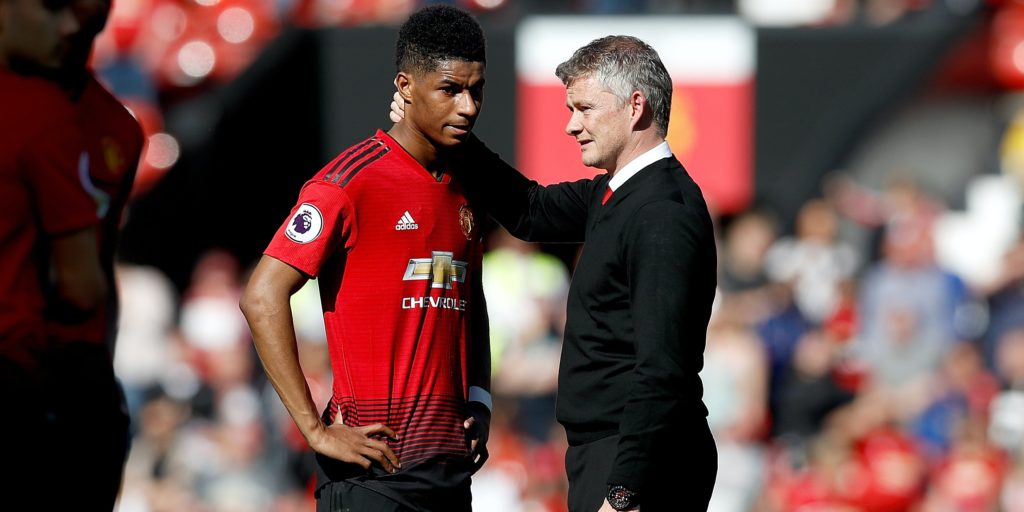 The Manchester United striker forced a Government U-turn on free meals being extended through the summer holidays.

Manchester United manager Ole Gunnar Solskjaer spoke of his immense pride at Marcus Rashford’s work helping others and affecting change during the lockdown.

The England forward wrote an open letter to MPs urging the government to reverse its decision not to award free school meals vouchers in England – for which nearly 1.3 million children are eligible – outside of term time.

An impassioned follow-up article detailing his experience of growing up using food banks and receiving free meals as a child helped prompt a government U-turn, with the establishment of a ‘Covid summer food fund’.

United boss Solskjaer said: “As a club and me as his manager as well, it’s been fantastic to follow Marcus throughout the lockdown period as well.

“It’s not only that he got the Prime Minister to change his mind, but also what he’s done over the last few months.

“Marcus is such a top, top human being and he’s brought his own experiences as a kid into this conversation and will change the lives of so many kids.

“He’s already been captain of the club at such a young age and he’s proving all the time his human qualities, which is a main attribute for a Man United player – along with his quality as a player, of course.”

Players took a knee during Wednesday’s Premier League matches as part of the Black Lives Matter movement – something the United boss fully supports ahead of Friday’s trip to Tottenham.

“I think it’s been an event in history that has changed people’s views and of course the movement now,” Solskjaer said.

“I think we all know that this shouldn’t happen in 2020, what has been happening.

“Players and Premier League teams have all made a stand and say ‘enough is enough’.

“I think that’s good and I don’t expect anything different from ours.”

Phil Jones and Axel Tuanzebe will miss Friday’s game and the beginning of ‘Project Restart’, but Rashford and Paul Pogba are available after lengthy spell on the sidelines.

Shanghai Shenhua striker Odion Ighalo has signed a loan extension making him available for the rest of the season, but talented teenager Angel Gomes’ contract is set to expire at the end of the month.

“He’s a top, top kid that we’ve had in the club for so many years and we’ve offered him a deal,” Solskjaer said.

“Hopefully he’ll take that. If not, I wish him all the best.

“Hopefully from what I understand it’s not too far away. If not, we’ll wish him all the best.”