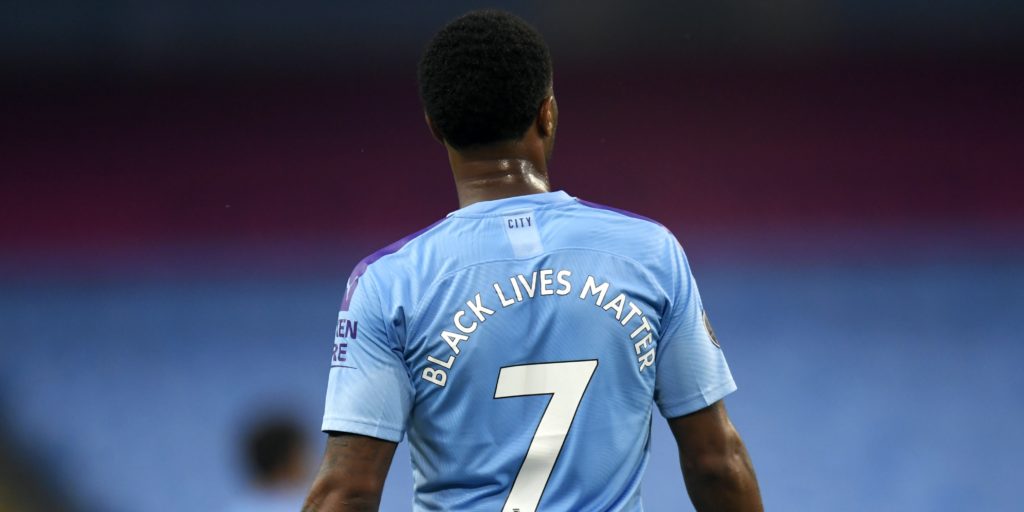 Players and officials took the knee at the start of both matches on Wednesday night.

Raheem Sterling believes all players taking the knee as the Premier League restarted proves that the Black Lives Matters movement is heading in the right direction.

Players and officials took the knee at the start of both matches, between Aston Villa and Sheffield United and City against Arsenal, and Sterling was pleased to see the act of solidarity.

Sterling told Sky Sports: “I see it as a massive step for the Premier League to allow something like that to happen. It shows we’re going in the right direction.

“Little by little we’re seeing change and that’s what everyone is hoping for, not just black players, I think the majority of the country and it’s great to see.”

Guardiola added: “We should send one thousand million messages for black people. For centuries, for hundreds of years to do what we do for these lovely people.

“I’m embarrassed, I’m ashamed for what the white people have done for the black people. Just because you are born with another colour of skin, how can people think you are completely different than others.

“All these gestures are good, they are positive but you have to do it with facts. It can’t be solved in a few days but everything we can do we can do. We have to do a lot of things for the black people that we have not done so far.”

Sterling opened the scoring in a routine victory for City at the Etihad, with Kevin De Bruyne’s penalty and Phil Foden’s late strike completing a 3-0 win.

David Luiz was sent off on a miserable night for Arsenal, who also lost Granit Xhaka and Pablo Mari to injury.

“In the beginning there was a lot of energy, everyone wanted the ball,” Guardiola said.

“It was important to get the first goal before half-time and then after that with the penalty and the sending-off it was a completely different situation.

“You cannot say anything else about that but be happy about the performance of the team and everyone and the good shape.

“We have players who are so dynamic maybe they don’t need many training sessions to be in top condition.”

Sterling’s goal was his first of 2020 and the England forward believes City adapted well to the new environment of behind-closed-doors matches.

“We expected it to be weird, but the message since we came back from the break we had is we’ve got to find something in ourselves, we had to dig deep and I thought the boys kept composure and fought to the end,” he added.

“I think the first 10 (minutes) we were kind of getting used to the atmosphere, getting the cobwebs off but after that we took our chances well.

“It’s (the goal drought) something I’ve been beating myself up about but I knew at some point I’d get my opportunity and I needed to take it, and I’ve done that today.”

It was a miserable return to the Etihad for Mikel Arteta, who said: “Everything went wrong from the first minute when Granit Xhaka got injured and we had to change the plan. Every possible accident hopefully happened today and not in the rest of the 10 games we have ahead of us.”

But Arteta would not criticise the hapless Luiz, and said the night would have no bearing on a decision to exercise the option on his contract.

“He has spoken in the dressing room,” Arteta said. “David is someone who is very honest, straightforward, I’m sure he will talk to you guys and explain his feelings. But my opinion has changed from the moment I joined the team and it won’t change because of a difficult performance tonight.”